Carry on Films are my Guilty Pleasure…. 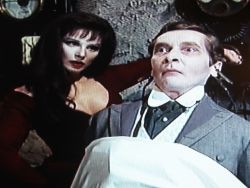 This is one of the classic scenes from Carry on Screaming – with a mix of carry on regulars such as Jimmy Dale and Kenneth Williams along side Harry H Corbett (standing in for Sid James as Sergeant Bung) – delivering the quick fire wit and word play of classic carry on films.

I have always loved the carry on films – especially the ‘historic’ or ‘literary’ parodies:  Carry on Henry with costumes better than some Hollywood Epics; Carry on Cleo sending up Julius Caesar, Anthony and Cleopatra with such verve; and one of my all time favorites Carry on don’t lose your head a less than decorous take on the Scarlet Pimpernel.

However, possibly the best Carry on Film ever made (in my opinion at least) is the fabulously creepy Carry on Screaming.  Directed by Gerald Thomas with and written by Talbot Rothwell it premiered in 1966 and lovingly parodied both the Universal Horror films of the 1930’s and the Hammer Horror films that were so popular at the time.  It deals in typical Carry on fashion with several of the staples of the horror genre:  Dracula (Dr Watt’s catch-phrase ‘Frying tonight’ is supposed to be a reference to Dracula ‘Flying tonight’); Dr Jekyll and Mr Hyde; Mad scientists; homicidal Egyptian Mummies; wolf-men; the vampire temptress; the virginal heroine/victims (with varying degrees of allure:  see Sergeant Slobottom in a frock for reference!) Even the title song was memorable and had its own legend attached to it – for many years fans thought Carry on regular Jimmy Dale was the singer (he wasn’t – it was actually Ray Pilgrim).

One of the distinctive things about the film is the look of it – it really feels like a classic hammer horror from its dark sinister woods to the OTT cobwebbed Victorian mansion ‘Bide-a-wee’ with its crazy scientific paraphernalia in the basement.  This may be due to the influence of photographer, Alan Hume, who also worked on Hammer and Amicus horror films in the 1960’s.

Smoking indoors was allowed back then.. 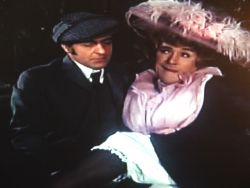 Other Carry on regulars also feature as bit players – Joan Simms as Bung’s shrewish, telephone-phobic wife; Charles Hawtrey (written in at the last-minute for the American market) does a very camp turn as a toilet attendant known as Dan Dan the —- Man. Even future Dr Who, Jon Pertwee,  has a cameo role as the police’s own mad scientist Dr Fettle.

I would like to end with a transcript of my favorite scene from Carry on Screaming, a scene between Sergeant Bung, Constable Slobottam and Dr Watt…the scene owes a lot to Abbott and Costello’s ‘Who’s on first’ sketch but is done with the Carry on teams inimitable style:

Bung: ‘Are you prepared to make a statement?’
Watt: ‘I did didn’t I?’
Bung: ‘I’d like my assistant to get it on the record sir.  Now, if I could have your name please.’
Watt: ‘Dr Watt’
Slobottom: ‘Dr-Who- sir?’
Watt: ‘Watt – Who was my uncle or was, I haven’t seen him for ages.’
Slobottom: ‘We appear to be at Loggerheads sir’
Watt: ‘No, this is Bide-A-Wee, Loggerheads is about 5 miles down the road.’
Slobottom: ‘No, no, about your name.’
Watt: [irritated] ‘Watt’
Slobottom: ‘What’s your name?’
Bung: [shouting] ‘Watt’s his name!’
Slobottom: ‘Thats what I’m trying to find out sir’
Bung: ‘Excuses, excuses, nothing but excuses.  Just get the statement down ‘I haven’t see or heard anything suspicious in the vicinity this evening.’
Watt: ‘You too ey?  So glad it wasn’t just me who didn’t…’