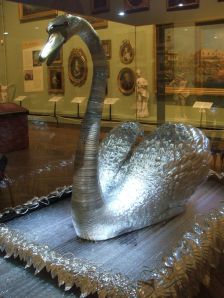 The eighteenth century was a time of magic and mystery despite – or perhaps because of – the Enlightenment.  The more scientific, rational and demystified the world became, the more people sought out the shadows, the unknown and the extraordinary.  From the passion for the Gothic Novel, to the vogue for seances and Phantasmagoria, the thrill seekers and the curious were desperate to be amazed.  Science helped to fulfill this need, and Scientists became the new Wizards of the age – often just as good showmen and PR guru’s as any  market-place mountebank.

Automata were at the forefront of eighteenth century technological developments, yet they were also things of beauty and wonder that posed philosophical questions about the human condition.

One of the most sublime and magical of the Automata, in my opinion,  is the Silver Swan created by a later-day Merlin.  Truly a master of mechanical magical arts – John Joseph Merlin (1735 – 1803) was an eccentric Belgian inventor who came Britain. 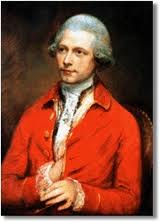 Merlin was from an early age a genius with clockwork.  He studied at the Academie des Sciences in Paris and at only 25 years old he was already a well-known inventor, so much so that he was brought to England by the Spanish Ambassador.

He enthusiastically threw himself into the heart of Georgian celebrity culture, he had a knack for hanging out with the intellectual and artistic ‘in-crowd’ (Dr Johnson, Gainsborough, Walpole and JC Bach (son of JS) to name but a few).  He also had a talent for publicity.   One of his favourite publicity stunts was to attend soirees dressed up as a barmaid, whilst whizzing round the bemused guests on roller skates (also his invention) serving drinks – or playing the violin (he could do that as well –the smarty pants!).

On the subject of his inventing roller skates, I can’t help but mention on of the most famous and oft-repeated anecdotes about him, which was recorded by Thomas Busby in 1805 (some years after Merlin’s death):

“One of his ingenious novelties was a pair of skaites contrived to run on wheels.  Supplied with these and a violin, he mixed in the motley group of one Mrs Cowley’s masquerades at Carlisle House; when not having provided the means of retarding his velocity, or commanding its direction, he impelled himself against a mirror of more than five hundred pounds value, dashed it to atoms, broke his instrument to pieces and wounded himself most severely”

Note the wonderful eighteenth century emphasis on the damage to property prioritized over personal injury! Fortunately Merlin is said to have had a good sense of humour (and a strong constitution – one hopes).

He was also noted for being very musical (hence the violin) and inventing and improving various musical instruments including a Barrel Organ for a princess and a compound harpsichord with pianoforte action which was used by Bach.

The Silver Swan and the modern computer

The famous Silver Swan came about through a partnership between Merlin and James Cox.  Cox was a jeweller and clockmaker with brassy flare of a showman.  The perfect promoter for top end exquisite and exclusive Automata. 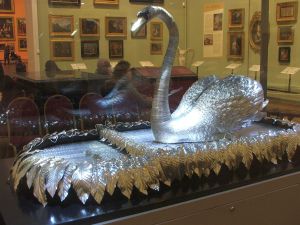 The Silver Swan, created in 1773, was a show stopper from the start drawing huge crowds to ‘The Mechanical Museum of James Cox’ in London.  It was exhibited in 1867 at the Paris Exhibition, and bought by John and Josephine Bowes in 1872 for their museum in Barnard Castle.  And that is where it remains to this day – as the star turn of Bowes Museum.

The Swan is the ultimate luxury object – solid silver, with a top of the range clockwork mechanism and artistic touches such as the uneven glass rods that form the water in which the swan sits – Cox gave the Swan its beauty whilst Merlin gave it life.

Imagine the swan in action in candle-light, flickering flames making the water shimmer as the swan inclines its elegant silvery neck, whilst eerie music plays from within its mechanism.

In 1783, after Cox ran into financial difficulties, Merlin opened his own show room: ‘Merlin’s Mechanical Museum’; it ran with great success for a number of years. Amongst his clock-work masterpiece was a perpetual motion machine run by changes in atmospheric pressure as well as his famous automatons.

Charles Babbage, inventor of an early proto-type for modern computers visited this museum as a child and was mesmerised by what he saw, and became hooked on the potential of automata.

He was so taken with two saucy little nude automata that years later he eventually acquired them for his own delectation (all in the course of research – naturally).  He described them thus:

“..she used an eye-glass occasionally and bowed frequently as if recognizing her acquaintances….” the other “..an admirable danseuse, with a bird on the forefinger of her right hand, which wagged its tail, flapped its wings and opened its beak….the lady attitudinized in a most fascinating manner.  Her eyes were full of imagination, and irresistible.”

The price of perfection

There was also a dark side to this beauty and technology.  For much of the eighteenth century these beautiful and innovative creations were produced by highly skilled low paid workers.  Artisans who worked by candle-light on tiny mechanisms.  Many of them must have damaged their eyesight or gone blind.  And of course, most ordinary people would never have been allowed to glimpse these marvels of the age as they were primarily for the entertainment of the wealthy elite. One famous maker – Pierre Jaquet-Droz even vowed that no servant would ever see his creations. 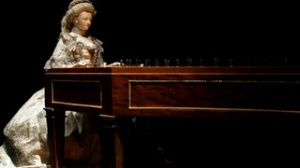 Automatons were so much associated with the elites and ruling classes that during the French Revolution, revolutionaries likened the hated aristo’s to the automatons that they loved so much: “bodies without souls, covered in lace”.

The Legacy of Celestial Clockwork

Mark Twain described his viewing of the Silver Swan in action in his book ‘Innocents Abroad’:

“I watched the Silver Swan, which had a living grace about his movement and a living intelligence in his eyes – watched him swimming about as comfortably and unconcernedly as if he had been born in a morass instead of a jeweller’s shop – watched him seize a silver fish from under the water and hold up his head and go through the customary and elaborate motions of swallowing it..”

Automaton from Dr Who ‘The Girl in the Fireplace’

I think Mark Twain truly captures the essence of automata here, they were not just imitations of life, there was a growing philosophy that the body and machine could become one and be recreated in clockwork.  Scientists and philosophers saw automatic movements and processes in the way the bodies of humans and animals worked and many automaton’s were designed to replicate these processes and in doing so posed the question were humans really any different from machines?

These early Automatons also hinted at the industrial revolution and the mechanisation of many industries (such as the textile industry) which had a direct impact on the working classes.  They were also very early precursors of the computer: automatons were directed in their actions by Cams, each cut differently, and capable of ordering the movements of the automaton.  Often hundreds of cams were required, and as many were numbered, potentially an automaton could be programmed to perform a variety of tasks by rearranging them – a mechanical form of computer programming.

They have also helped inspire and drive the creative imagination in literature and in science in the form of robots and androids.  And reality is fast catching up with sci-fi with sophisticated robots such as Asimo, and the current debate about the possibility of creating ‘killer’ robots in the not to distant future.

Unfortunately very few of the original automatons survive, and those that do, are often just as inaccessible to ordinary people as they were in the eighteenth century.  However, it is still sometimes possible to glimpse one of these remarkable creations in action.  The Silver Swan at Bowes Museum, Barnard Castle, is operated every day at 2pm for the public.  I have seen the swan in action, it is incredible to watch a clockwork masterpiece built 240 years ago working so perfectly.  You can see it in action on You Tube on the link below, and details of how to visit can also be found  below.

11 thoughts on “Merlin and the Silver Swan”