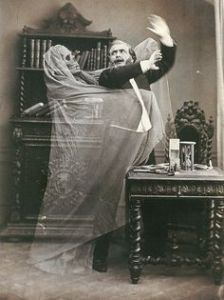 The image of the vengeful ghost is one which is very common in literature, films and folklore. Usually the spirit returns to wreak revenge on someone who had wronged them when they were alive or to seek help in carrying out their revengeful plan or even just to curse those who unluckily come into contact with them. Famous fictional examples include The King in Hamlet, Samara from The Ring series and Jennet Humfrye from The Woman in Black. There are also people who claim that evil spirits intent on causing them harm share the same house. For instance The Cage in St Osyth which was labelled as one of the UK’s most haunted houses by the TV series, Great British Ghosts is reported to be occupied by the vengeful spirit of Ursula Kemp, one of 13 women accused of witchcraft who were chained up in the house prior to their execution[1].

The flip side of the coin is spirits who return to help the living rather than to harm them. There are many reasons given as to why they return such as to bring comfort to grieving family and friends, to impart a message such as the location of important documents or family heirlooms or to give a warning. One of the most often repeated stories involves a pact made between two close friends, John Middleton and Laird Bocconi to help each other from beyond the grave.[2] 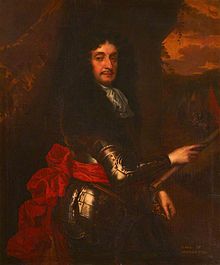 John Middleton born around 1608 was the eldest son of a Robert Middleton, Laird of Caldhame in Kincardineshire in Scotland. Middleton’s origins are obscure which probably indicates that he was from a humble background. Some sources say that he enlisted as a regimental pikeman when he was just thirteen but all agree that by 1632 he had joined the regiment raised by Sir John Hepburn for service in France. Whatever the truth of his origins, Middleton was a career soldier and a good one. It was due to his skill and ability that he worked his way up the ranks to become captain of the Covenanter army led by Earl James Graham of Montrose during the Bishops’ Wars[3].

Victory at the Battle of the Brig O’Dee 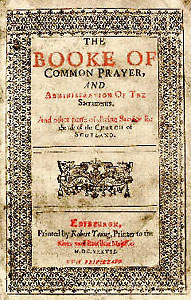 The Bishops’ Wars (1639-1640) were triggered by Charles I desire to remove the Presbyterian system (without bishops) favoured by the Church of Scotland and replace it with an episcopal system (with bishops). Charles I also wanted to force the Scots to follow the Book of Common Prayer.
The determination and success of the Scottish rebellion led to Charles I eventually admitting defeat and accepting the decisions of the General Assembly and the Scottish Parliament. Middleton played a vital role in the Covenanter army. In June 1639, he successfully led an attack on the Royalists at the Brig o’ Dee outside Aberdeen. The battle at the Brig o’ Dee was the only ‘substantial action’ that took place during the First Bishop’s War. 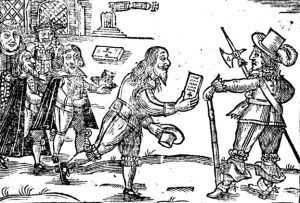 At the outbreak of the English Civil War in 1642, the Covenanter army allied themselves with the Parliamentarian cause against the Royalists. Middleton volunteered and fought at the Battle of Edgehill and in 1644 he was promoted to the rank of the Lieutenant-General in the Regiment of Horse in Sir William Waller’s Southern Associate and served in the Oxford Campaign and at the Battle of Cropredy Bridge. In 1645 Middleton returned to Scotland and joined the Army of the Covenant with the rank of major-general. In February 1646 Middleton was given the rank of commander-in-chief by the Committee of Estates and fought a campaign against the Royalists in the Highlands. Middleton also helped to negotiate the final terms for the surrender of Montrose (who he had formerly fought under) in July 1646[4].

Although between 1642 and 1647 the Covenanters and the Parliamentarians fought on the same side, the alliance was often on shaky grounds. Differences of religious ideology made them uneasy bedfellows. The parliamentarians were unhappy with the Scottish aim to impose a Presbyterian system on the Church of England and the Covenanters were equally uncomfortable with the increased radicalisation of the parliamentarian troops and the popularity of the levellers’ ideas in the New Model Army. The conflict between the two allies came to a head shortly after the Covenanters handed over Charles I to the parliamentarians after the king had surrendered to them at Newark in 1646. This led to an alliance or the Engagement between the Scots and the Royalists with Charles I promising to impose Presbyterianism on the Church of England for a period of three years once he was reinstated on the throne[5]. 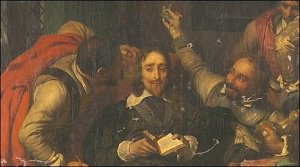 A Change of Heart

As the covenanters changed alliances so did Middleton and as a result he found himself for the first time fighting for Charles I instead of against him. In August 1648 Middleton was amongst those who were taken prisoner by the Roundheads after the Royalist defeat at the Battle of Preston. Middleton broke parole and made his way back to Scotland to join up with Sir Thomas Mackenzie of Pluscardine in an abortive Royalist uprising in the Highlands in the Spring of 1649. 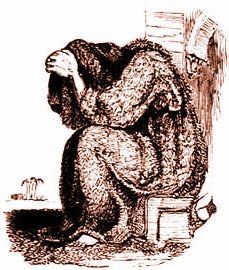 Middleton’s support for both the Royalists and the Engagement brought him into conflict with the Presbyterians of the godly Kirk. Middleton was probably not someone whom the Presbyterians would have been too fond of anyway because of his reputation as a notorious ‘hard-drinking ruffian’[6]. As a punishment they excommunicated Middleton in October 1650 and then forced him to undergo a public penance. Middleton was made to wear a sackcloth at St Mary’s Kirk in Dundee[7]. This humiliating experience left Middleton with a deep hatred of and grudge against the Presbyterians. As a result of his degrading treatment Middleton became a loyal supporter of the Royalists and in particular Charles II. His grit, experience and ability made him indispensable to Charles II and a dangerous foe to the Presbyterians who he was once willing to put his life on the line for. 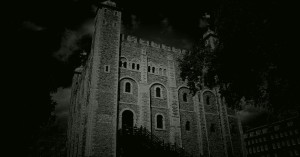 The Tower of London. Source: hauntedisland.co.uk

In September 1651 whilst fighting on behalf of Charles II, Middleton was captured at the Battle of Worcester. In a bad state and wounded Middleton was sent to the Tower of London to await trial for treason. It is whilst he was a prisoner that one of the strangest stories of a ghostly apparition was reported to have occurred. One night while he was lying in bed feeling depressed, Middleton saw the ghost of his friend, Laird Bocconi appear before him. Many years before Middleton and Bocconi had made a friendship pact that if one of them died before the other and if the survivor was in trouble, the deceased friend would return to help him. Middleton first asked Bocconi if he was alive or dead[8]. Bocconi’s ghost replied that he was dead and that he had died a long time ago. Bocconi then continued that Middleton’s life was in serious danger and that he needed to make his escape sooner rather than later. Middleton did in fact manage to escape three days after receiving this ghostly advice by disguising himself in his wife’s, Lady Grizel’s clothes. His escape was even more remarkable since he manage to get out his cell despite the door being tripled locked! Did he have inside help? Did his wife change places with him? No one knows and no other details about how he got away have ever emerged. 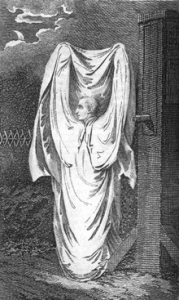 Bocconi’s appearance up to the point of his warning seemed to follow a typical pattern for manifestations of this type but then after delivering his message Bocconi did something very bizarre. Middleton reported that Bocconi started to do a frisk i.e. jigged around the room and recited a short rhyme,

In the world to see so sudden a change”[9]

Then Bocconi vanished. Why did Bocconi’s ghost suddenly decide to prance around the cell and chant and what if anything did the rhyme have to do with Middleton’s situation? Bocconi’s use of the Italian equivalent of the name ‘John’ does show that Bocconi was addressing Middleton directly but the rest of his chant is confusing. Was the ghost referring to Middleton’s personal change in circumstances i.e. from a free man to a prisoner or to the remarkable change in his allegiances or more generally to the tumultuous times Middleton was living in? Could the message have been a prediction about Middleton’s future and his rise in the world? No one has ever managed to explain the ghost’s actions or to be fair I don’t think anyone has ever tried.

Middleton managed to get to France and join the exiled Charles II in Paris. By 1653 he was made commander of the Royalist forces and was at the forefront of the military campaign to restore the Stewarts to the English throne. When Charles II became king he was given the title of the Earl of Middleton. Middleton was appointed in 1660 as the Royal Commissioner to the (Scots) Parliament[10] using his position to help the king root out Presbyterianism from Scotland. His rapid rise from humble beginnings caused resentment amongst the established nobility, in particular the Earl of Lauderdale who contrived to destroy Middleton. Lauderdale succeeded for a while with Middleton being stripped of his position and offices but he was soon back in favour. In 1663 he was made Governor of Rochester and later in 1668 he was appointed as the Governor of Tangiers. Middleton remained in Tangiers as governor until his death in July 1674[11]. It is believed he died from injuries sustained after falling down some stairs whilst extremely drunk[12]. 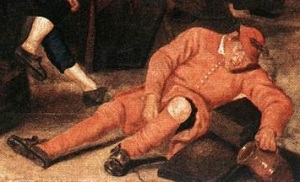 On a historical note, Middleton had the last laugh as despite the Scottish aristocracy contempt for him, his descendant is currently sitting on the throne of England! Queen Elizabeth through her matrilineal line is a direct descendent of John Middleton[13]. The only mention of Bocconi I could find was in relation to his ghost, who he was, what he did and how he met Middleton seems so far to have vanished from the pages of history. Maybe they met when Middleton was fighting on the continent. Bocconi sounds Italian but the title of Lord was given in its Scottish form. Does that mean anything? probably not. As to the ghost story, it is a unique tale revealing very strange behaviour on the part of the spirit, from a dignified and ominous entry to a rather silly exit. I would also be fascinated to know if anyone ever manages to work out the meaning of Bocconi’s last words on earth!

Alisdair McRae, How the Scots won the English Civil War: The triumph of Fraser’s Dragoons

Owen Davies, The Haunted: A social history of ghosts

[2] Owen Davies, The Haunted: A social history of ghosts

[7] Alisdair McRae, How the Scots won the English Civil War: The triumph of Fraser’s Dragoons