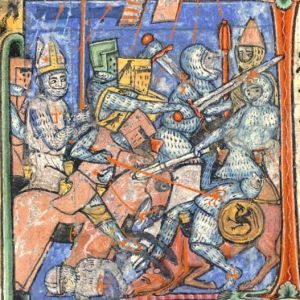 Wimund’ s background is shrouded in mystery with even the chronicler William of Newburgh, a canon of Newburgh Priory and the author of Historia rerum Anglicarum (“History of English Affairs”), who had direct contact with Wimund and wrote a brief account of his life unable to give a clear picture.

William of Newburgh recounted that Wimund was “born in the most obscure spot in England”[1]. From the information that is given Wimund was probably born in Cumbria possibly near the area of Furness.

Wimund himself believed that he was the heir of the Earls of Moray in Scotland although at the time most of his contemporaries viewed this claim as spurious. Recently a re-examination of the evidence has led some historian to give credence to Wimund’s assertion. Many have supposed that Wimund was referring to Angus of Moray, the son of Lulach, King of Scotland, who was killed in 1130 but Richard Oram in his book ‘Domination and Lordship: Scotland 1070 – 1230’ presents the theory that it was in fact William, Earl of Moray and son of Duncan II, who was in actual fact the father of Wimund.

William himself spent some time in Allerdale with his mother’s family after the murder of his father in 1094. Allerdale is also located in Cumbria, so it is not out of the realms of possibility that William could have met Wimund’s mother and had a child by her.

If Wimund was the illegitimate son of William of Moray and so was the grandson of Duncan II of Scotland then it would explain why Wimund believed he had a claim to the crown of Scotland and why he chose to go down the path he did.

Wimund was educated at Furness Abbey. The abbey was founded by the future Stephen I of England in 1127. Although the architecture lacked the grandeur of some of the older and more established religious houses the “isolation of Furness increased rather than checked a power possessed by few religious houses in the north; and the abbot ruled vast territories with feudal independence and social advantage”[2]. 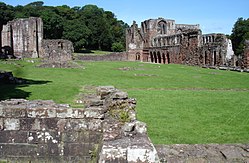 It was said that due to Wimund penmanship that he was assigned the task of transcribing old writings in monasteries. Wimund had proved that he was a good scholar, intelligent and astute. He was also ambitious and being fortunate enough to belong to an important religious centre must have made him hungry for advancement and power.

In 1134 Olaf I, King of the Isles (which included the Isle of Man, the Hebrides and the Islands of the Firth of Clyde) requested that Furness Abbey should found a sister abbey on the Isle of Man. Wimund was a member of the party that was sent to help establish and manage the Abbey of Rushden. Wimund made a good first impression. He was tall and athletic with a “sweetness of face” and “three admirable requisites – an ardent temper, a retentive memory and competent eloquence”[3]. Therefore it was only natural that when the abbey was granted the right to elect a bishop during the time of Thurstan, Archbishop of York, Wimund was chosen. He was given the title of ‘Bishop of the Isles’ or ‘Bishop of Sodor’ and was described as the bishop of sancta ecclesia de Schith, ‘Bishop of the Holy Church of Skye’.

At some point in the late 1140s, probably after the death of William of Moray, Wimund decided to fight for what he believed was rightfully his.

William of Newburgh’s disapproval of Wimund’s actions rings out loud and clear as he writes “[n]ot content with the dignity of his episcopal offices, he next anticipated in his mind how he might accomplish great and wonderful things; for he possessed a haughty speaking mouth with the proudest heart”[4]. 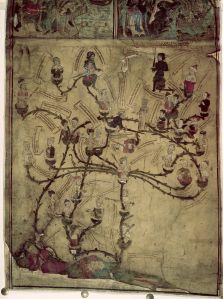 Although most historians agree that Wimund began to terrorise Scotland to avenge himself on David whom he believed had unfairly deprived him of his inheritance, there also seemed to be another grievance which involved Gille Aldan, the Bishop of Whithorn. Some researchers have merged the two conflicts but others see them as separate issues[5].

The first, Wimund’s paternal inheritance is well-documented. At the time of William’s death his legitimate heir was not yet ten years of age and so was not able to take on his father’s responsibilities and role. William as well as being the Earl of Moray had possessed the areas of Skipton and Craven in Yorkshire and so David had not only lost a key ally but also a strategic foothold in northern England. This foothold had been vital component in David’s expansion plans as well as his desire to pressurise and dominate the already weakened King Stephen. Wimund obvious believed that he was entitled to a share of his father’s lands and saw David as an obstacle. He may have also seen David as a usurper. If Wimund was the son of William then he could claim the eldest son of Malcolm III as his ancestor which would mean he did in fact have a stronger claim to the throne of Scotland than David who was descended through the line of Malcolm’s youngest son.

The second conflict was with Gille Aldan. Aldan was made the first bishop of the restored bishopric of Whithorn. The appointment was made with the approval of Pope Honorius III. The lands of Whithorn were subject to the Bishops of the Isles and so it could have been that Wimund was trying to prevent the loss of lands belonging to Rushden Abbey.

Whatever the reasons behind his subsequent actions, Wimund managed to raise a large army from the male population of the Isle of Man. His army were either convinced by Wimund’s arguments or money to follow him into battle. 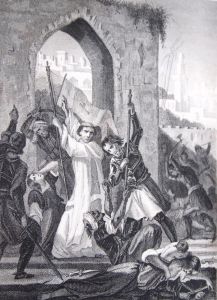 William of Newburgh describes how Wimund came by boat and descended on Scotland embarking on a “mad career” of pillage, rapine and slaughter disturbing “the tranquillity of a nation happy and contented under the government of a virtuous prince”[6].

Standing a head and shoulder taller than his men, he must have been an imposing figure as he sailed around the islands of Scotland striking fear into the hearts of the islanders.

David sent royal troops to deal with Wimund’s threat but Wimund had the upper hand. His army would either dissolve into the forests or take to the sea and just wait until the troops had left. They would then return to carry on attacking and terrorising the local villagers.

Even in an age which was inured to hardship, violence and warfare, being attacked in this manner by a man of god and their own bishop turned seafaring pirate and warlord “this fisher of men turned hunter of men”[7] must have been viewed as a strange and disturbing turn of events.

It is recorded that an unknown bishop, probably Gille Aldan, refused to pay the levy demanded by Wimund. It is said that the bishop swore that he “never will establish a precedent for one bishop paying tribute to another”[8]. Finally the bishop unable to take any more provocation and threats from Wimund raised his own army and met Wimund on the battlefield. 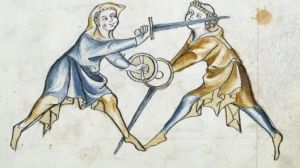 Despite probably being less skilled in the art of warfare and with less experienced men, the bishop threw the first hatchet and managed miraculously to strike Wimund, wounding him severely. Somehow Wimund managed to escape but seeing their leader felled, the rest of his men turned tail and fled.

Even being seriously injured did not put a stop to Wimund. Somehow he managed regroup his men and continue to be a thorn in David’s side.

Eventually David realised that Wimund was too strong and too dangerous to be stopped by force and decided that a new approach was needed. David who had been given control of the whole of Cumberland and Westmoreland by Stephen in 1136, granted Wimund the lands and monastery of Furness as a symbol of reconciliation.

Although both David and Wimund might have been satisfied with the arrangement, the people of Furness and the surrounding lands which were now under the control of Wimund were less than pleased.

Wimund must have infuriated them with his arrogance and manner and it is highly likely that Wimund treatment of them must have both harsh, ruthless and contemptuous because after a while, they could no longer stomach his presence and plotted to overthrow him.

The people with the consent of their nobles decided to teach their errant bishop a lesson he would never forget. They laid a trap. Somehow they managed to isolate Wimund from his men whilst he was following behind a large party of entertainers. They grabbed him, kidnapped him and bound him. They then proceeded to castrate him making “him a eunuch for the sake of the kingdom of Scotland, not for that of heaven” and “as both eyes were wicked, deprived him of both”[9]. 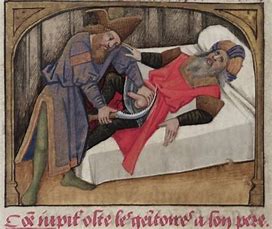 Wimund was taken and imprisoned in the castle of Roxburgh. He was later pardoned and retired to the Abbey of Byland in Yorkshire.

It was here that William of Newburgh, whose abbey was only two miles from Byland, came into contact with the notorious bishop.

William stated that despite Wimund’s severe mutilation, his spirit was neither dampened nor chastened. He never expressed regret for any of his actions or the harm that he had caused. Instead the complete opposite, he joked that he had never been beaten in battle except by a silly bishop and boasted of his deeds declaring that if he only had “the eye of a sparrow his enemies should have little occasion to rejoice at what they had done to him”[10].

Hardly the traditional image of a humble man of god!

A larger than life figure

Was Wimund a fraud and “a flagitious impostor”[11]? It is so hard to tell with the limited information available. Even William who had direct contact with Wimund seemed unable to come to a firm conclusion. The one thing that does suggest that there was some validity to Wimund’s claim is that despite all his terrible actions and the threats he had issued against the king of Scotland, David never exacted the ultimate revenge by executing his adversary. Despite being cruel, brutal and merciless, Wimund must have had a magnetic personality and an unquenchable thirst for life. In some ways he reminds me of a medieval, real-life Long John Silver and he was unique in being the one and only ‘Bishop-Pirate’. 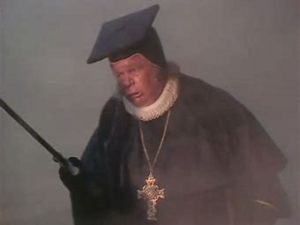 William of Newburgh: Book one, https://sourcebooks.fordham.edu/basis/williamofnewburgh-one.asp#24

David I: The King who made Scotland by Richard Oram, 2008