Halloween a time for ghosts, ghouls and …..Cabaret! 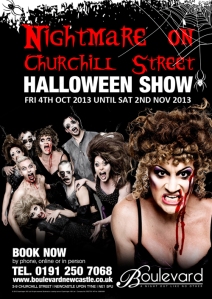 I love Halloween and all things ghastly and ghoulish and I was looking about for something to get me in the Halloween mood when I came across Boulevard’s Halloween Show.

Boulevard is a cabaret show in Newcastle, and one of the best nights out in the Toon.  A group of us decided to go to the Halloween show after having a stonking good time at a Broadway revue the troupe did a few months ago.  OMG what a night!  Almost everyone who goes to Boulevard spends the first few numbers getting over their initial sense of amazement that the cast are ALL men, yes, even Glinda the Good Witch (how pretty was she!)

The evening is compered by the utterly divine Miss Rory, whose acid tongue lashes the audience one by one – no one is safe!  Throughout the night Miss Rory keeps the audience in their place (which is clearly somewhere way beneath her glorious eminence!) and her acerbic repartee keeps everyone in stitches.  The brave can even get a photo with Miss R if they dare!

The show opened with a barnstorming number from The Nightmare Before Christmas with  lycra clad dancers prancing through the audience dressed to kill (literally!)  The programme contained scenes from Chicago, the Rocky Horror Show (with the whole audience reciting every word along with the cast!), a stunning rendition of Michael Jackson’s Thriller topped off the Halloween element to the show.

The Grand Finale was a very very tongue in cheek (Tongue in butt-cheek at times I think!) but affectionate performance of The Wizard of Oz that had the whole audience buzzing. 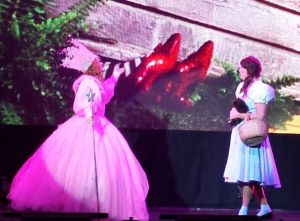 The utterly fabulous Betty Legs Diamond is the undoubted star of the show (I won’t be uncouth and mention the lady’s age – but high kicks and the caterpillar at her age – WOW!)   Betty has a pretty impressive pedigree, she won the Carl Alan Best Theatre Coach/Choreographer 2011 Award Winner and has performed in the West End of London, in the Royal Variety Show (in front of the Queeg and Prince Phillis no less!) and was in Funny Girls show in Blackpool for many years.

This is a great night out: hilarious and entertaining and with great dancers and fabulous routines.  Expect to be dancing in the aisle and singing until you are hoarse.

If there are any tickets left for the Halloween show (the night I went was a sell-out) you can buy them on the Boulevard website, otherwise you will just have to wait for the Christmas show!

Here are a few of my photos of the show, apologies if some are blurry but I took them on my phone!  (Boulevard allow photographs of the shows, but not videos). 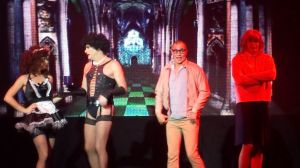 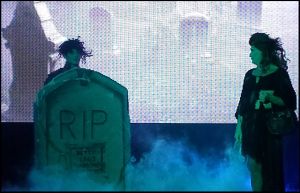 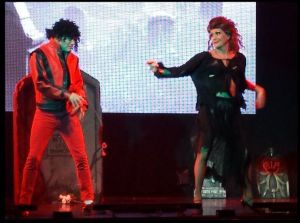 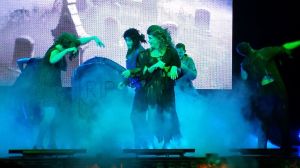 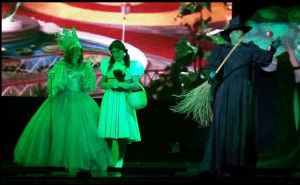 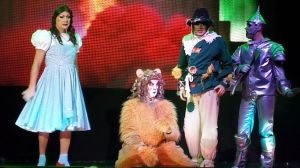 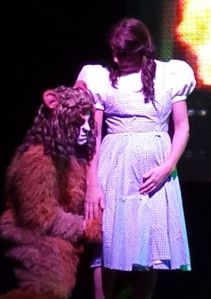 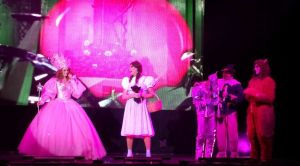 Dorothy gives Glinda a piece of her mind! 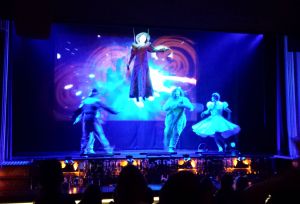 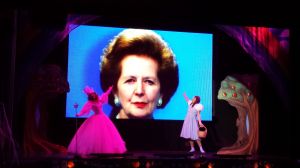 Ding dong the witch is dead!

The Woman in Black 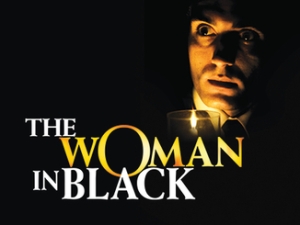 The Woman in Black at the Theatre Royal Newcastle

The Woman in Black stage adaptation originated because of a underspent grant.  The Stephen Joseph Theatre in Scarborugh needed a Christmas play and had just enough spare cash to do a very small-scale and intimate show.  Robin Herford was standing in for the theatre manager Alan Aykbourne and took the executive decision to ask the resident playwright Stephen Mallatratt to come up with a ghost story for no more than four actors.  He did, adapting the Susan Hill ghost story.  It was low-budget and with a cast of only two (not counting the Woman in Black herself) but quarter of a century later it is still packing out theatres and scaring the pants of the audience.

I attended the current production of The Woman in Black at Newcastle’s Theatre Royal.  It starred Julian Forsyth as Mr Kipps and Antony Eden as The Actor. It was directed by Robin Herford and adapted for the stage by Stephen Mallatratt from the novel by Susan Hill.

It’s a safe bet to say that a large proportion of the audience thought they already knew the story because they’d seen the film.  So  I could tell that there would probably be some surprised and possibly disappointed people in the audience tonight, when they realised that the play wasn’t quite the same – no CGI flummery for a start.

The stage was bare, a wicker basket, a chair and a coat rack the only props.  A frock-coated man clutching a leather-bound ledger walks on set, removes his coat and then, in a timid and faltering voice begins his narrative….and so begins this tale of terror.

The Woman in Black stage production is very different from the recent cinematic version starring Daniel Radcliffe and a range of chilling CGI effects.  It is bare, stripped back to the story and the story-teller. An old lawyer approaches a young actor and asks him to help tell a spine tingling tale of terror.  Slowly the audience is drawn in, and the story takes over.

The first act was made up of Mr Kipps, the protagonist, interacting with the unnamed actor who intends to help him present his story to the world so that he can free himself of the nightmares that plague him.  The contrast of the very voluble and enthusiastic thesp’ countered with the very reserved and timid Mr Kipps provides a lot of comic elements and humour which I think surprised a lot of the audience.  But, in my mind,  this just makes the second act all the more terrifying and intense as the actor and lawyer become ever more intertwined in the events they describe.

A play performed by only two actors is a difficult thing to pull off, especially a ghost story which could so easily fall prey to parody.  In this performance both Antony Eden who plays the actor and then takes the role of the younger Mr Kipps; and Julian Forsyth the ‘real’ Mr Kipps who also plays all of the other parts  (Mr Daley, the landlord, the taciturn Keckrick) both gave utterly compelling performances.  It just goes to show that even in the age of CGI pyrotechnics and audience will willingly suspend disbelief when a story is told well.

And the Woman in Black herself? Well, she provided all of the expected scares and shrieks and nervous laughter from the audience with her sudden and ghastly appearances.  I have seen the play before, many years ago, and although I could not fault the actors in this production, the Woman in Black was not such a terrifying presence as in the first version I saw.

Perhaps this is because I have seen the play and the film, so some of the ‘scares’ were easily anticipated.  But I did come away feeling that her presence in the first act was of the slightly hammy/parody variety.  I felt that she appeared too soon, her presence was too obvious and some of the chills and scares of the half seen apparition of that first production, were absent.  The second half on the other hand, was another matter – there were some really effective scares in the second half.  But over all I think her presence could have been initially much more implied, more mysterious than the production allowed for.

All in all though, I would recommend that you see this play, it was well acted and did contain some genuinely chilling moments.  Besides that, there are so few ghost stories I can think of that you can see on the stage, and fewer still where the ghost is so much more than a mere cypher.

The Woman in Black is currently on at the Theatre Royal in Newcastle:
http://www.theatreroyal.co.uk/whats-on/the-woman-in-black-0