In anticipation of Halloween I decided to revisit an old post of mine from 2013. Way back when I first started writing this blog I wrote about the fairly obscure local legend of the Wallsend Witches.  A gothic tale of horrible hags, revolting rituals and a dashing Delaval, all played out in the picturesque ruins of Old Holy Cross church, Wallsend.  The tale is found in print in several Victorian Table books and seems to have been oft retold in the eighteenth century by Sir Francis Blake Delaval (1727-1771) of Delaval Hall. 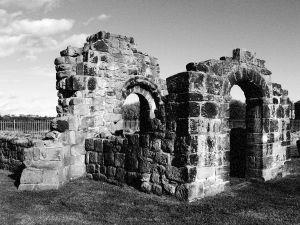 The gist of the tale is that a scion of the Delaval family was riding home late one night and noticed light emanating from Holy Cross Church.  Upon investigation he came across a band of hags performing a diabolical ritual upon a disinterred corpse.  Brave Delaval then apprehended the ring leader and brought her to trial and to the stake at nearby Seaton Sluice – but not before the accused had tried to make an aerial getaway on some enchanted plates.  For the full version of the tale, originally recounted in Richardson’s Local Table Book of 1838-46 but in this case taken from North-Country Lore and Legend, Monthly Chronicle (April 1888), click here: The Wallsend Witches: a tale for Halloween.

Having initially dismissed the tale as a combination of colourful folklore and florid Victorian Romanticism, I was surprised to come across an actual report of a Wallsend woman accused of witchcraft during the sixteenth century. 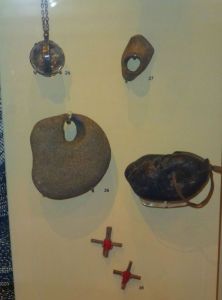 I first came across this case in A History of Northumberland volume XIII which provides an extract from an earlier source: Depositions and other ecclesiastical proceedings from the courts of Durham,extending from 1311 to the reign of Elizabeth.  After a little digging I managed to get hold of a copy of the depositions, published by the Surtees Society in 1845. Here was discussed the case of one Janet Pereson of Wallsend, accused of witchcraft in about 1570.

Janet Pereson was accused by two people. One, a farmer called Robert Durham of Walshend, aged 72, who said ‘He hath heard saye that Jennet Pereson uses wytchecraft in measuringe of belts to preserve folks frome the farye’.  And the other one Catherine Fenwick, aged 20, the daughter of Constance Fenwick who accused Janet of taking payment for using magical charms to cure a little boy by the name of Benjamin Widdrington. Catherine went on to claim that ‘she knoweth not whether she is a wytche or not’. Despite the possibly malicious intent of the accusations, Janet herself was not accused of practicing malificent magic, rather, the accusations appear to indicate that she was some kind of local cunning woman or wise woman.

16th Century image of a witch and her familiars. Via Wikimedia.

While cunning folk would seem to be broadly speaking, forces for good, such ‘white witches’ did not escape censure and in fact their brand of magic, whilst not obviously malevolent in intent, was viewed by many as a threat to the very souls of those who sought their aid. 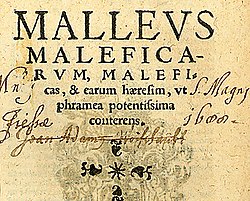 Title Page of 7 Ed of Malleus Maleficarum. 1520. Via Wikipedia.

In 1487 notorious women-haters Heinrich Kramer and Jacob Sprenger wrote of such cunning folk in their infamous book The Malleus Maleficarum:

although it is quite unlawful… bewitched persons… resort to wise women, by whom they are very frequently cured, and not by priests and exorcists. So experience shows that such cures are affected by the help of devils, which is unlawful to seek

Based on the information provided in the deposition, Janet’s case would seem fall into this category.   The accusation was recorded thus:

The said Pereson wyfe said the child was taken with the fayre, and bad hir [the child’s mother] sent 2 for Southrowninge [south-running] water, and then theis 2 shull not speke by the waye, and that the child shuld be washed in that water, and dib the shirt in the water, and so hand it up on a hedge all that night, and that on the morrow the shirt should be gone and the child shuld recover health – but the shirt was not gone as she said.

Robert Thompson, the Vicar of Benton, had the following to say about Janet:

Dicit that he herd one wedo Archer doughter called Elizabethe Gibson, saye that Jenkyn Person wyfe heled hir mother who was taken with the fayre, and gave her 6d for her payment and that the said Jenkyn Pereson wyfe took 3d of Edmund Thompson for a like matter.

Despite official unease over the practices of cunning men and women, they  were usually tolerated when they were performing helpful actions.  And,  Janet comes across as quite honest – she did not not steal the shirt left out over night (either that, or she really believed the fairies would take it). So what was going on?

Digging a little deeper, Janet seems to have been accused of witchcraft after her husband, William, and son, Jenkyn, were charged with stealing a horse from Robert Thompson, the Vicar of Benton [1]. Whether any or all of the accusations were true or not, it would seem someone was out to get the entire Pereson family. 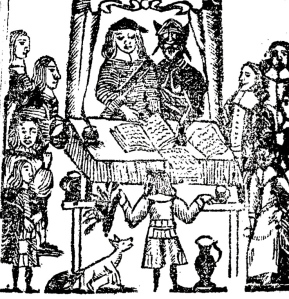 As has been pointed out by many writers on historical witchcraft, witchcraft accusations could often stem from long-standing local disputes or social anxieties, focusing on those seen as a threat to social order, either by virtue of their anti-social behaviour, illness, deformity or poverty.  This element could be a factor in Janet’s case, on initial reading, if the horse theft allegation against William and Jenkyn Pereson was true, it may indicate that they were a troublesome family.  Staying under the radar of officialdom was probably the safest course for a cunning woman, but the allegations against her husband and son could have brought Janet’s practices sharply into focus as well. 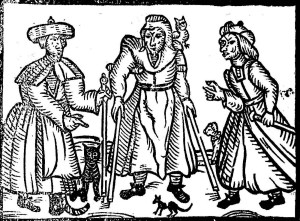 One important factor in Janet’s case can be found in the footnote of the Depositions. The witchcraft  accusations against Janet appears in a series of Exceptions against the witnesses to a tithe Suit relative to the Living of Benton. Tithe disputes were very common in pre-modern England, especially after the Reformation, and hinged over payment of church dues [2]. All the allegations against Janet and her family seem to have arisen as part of this tithe dispute. As Jo Bath points out, Constance, the mother of Katherine Fenwick (Janet’s accuser),  was a the one engaged in this acrimonious dispute with the Pereson family [3] and the Vicar of Benton seemed to have been willing to add his accusations to the pile. Perhaps this dispute, compounded with any other real or imagined anti-social behaviour by the family, was the last straw?  Or, maybe, Constance simply was ready to use any means at her disposal to win the argument, whatever the cost.  The case certainly shows how neighbourhood disputes could easily escalate into allegations of witchcraft. 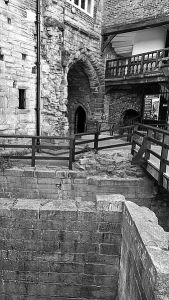 Unfortunately, the texts that I have seen do not provide the outcome of Janet’s case – I would be interested to hear if anyone has this information.  In the Surtees volume, a Janet/Jennet Pearson appears in relation to another case in Dunston in 1586. While differences of spelling were common at the time, it is hard, nevertheless to tell if this is the same woman or simply another with a similar name.

Broadly speaking, in England when cunning folk fell foul of the law, the were usually tried in the Ecclesiastical Courts rather than secular courts.  Allegations of providing charms, love potions, enchantments or even the of finding lost goods, could all wind a local cunning person in such a court, and this is what happened to Janet, as her case is recorded in the Depositions and other ecclesiastical proceedings from the courts of Durham.

The 1563 ‘Act agaynst Conjuracons Inchantments and Witchecraftes’ focused mainly on black magic and offered a penalty of death for anyone that ‘practise or exercise [of] any Witchecrafte Enchantment Charme or Sorcerie, whereby any pson shall happen to bee killed or destroyed’ they would be put to death.’  However, cunning folk were not overlooked and the Act goes on to say:

That yf any pson or psons shall from and after the sayd first daye of June nexte coming, take upon him or them, by Witchecrafte Enchantment Charme or Sorcerie, to tell or decleare in what Place any Treasure of Golde or Sylver shoulde or might bee founde or had in the Earthe or
other secret Places, or where Goodes or Thinges lost or stolen should be founde or becume, or shall use or practise anye Sorcerye Enchantment Charme or Witchcrafte, to this intent to provoke any pson to unlaufull love, or to hurte or destroye any pson in his or her Body, Member or Goodes; that then every suche pson or psons so offending, and being therof laufully convicted, shall for the said offence suffer Imprysonment by the space of One whole yere wthout Bayle.

Janet was tried in or around 1570, and her alleged actions would seem to meet the criteria of the recent legislation.  While the outcome of Janet’s trial was not recorded, it would be possible, that if found guilty, she could have been imprisoned (rather than burned at the stake – the purported fate of the captured Wallsend Witch).  Although it’s worth noting that imprisonment could in itself be a death sentence, due to the dreadful conditions in most prisons at that time.

From Fact to folklore 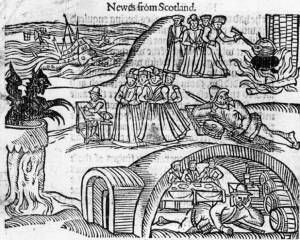 Contemporary Pamphlet about the North Berwick Witches. C1590. Via Wikimedia.

Having revisited the story of the Wallsend Witches and found in it a grain of historical truth, in that Wallsend did in fact boast at least one real-life alleged Witch, the tale of the Wallsend Witches takes on a new aura.  One in which real historical events evolve over time to become folk-lore – of course it would be hard to prove that Janet Pereson’s case is the ‘true’ origin of this tale. Nevertheless, it is appealing to think it forms the core: that as living memory of her tale faded, it began to incorporate such elements as the fate of the North Berwick Witches (burned at the stake in 1590) along with more fantastical elements of established folklore (such as that witches were thought to be able to use wooden platters to fly).

The story appears to have come down through the ages at first in folk-memory,  then, perhaps, permeating different levels of society though Sir Francis Blake Deleval’s constant retelling, eventually being embellished with the real location of Holy Cross Church, Satanic necromancy and a Delaval as hero, and ultimately being collected as a colourful piece of local lore, by Richardson in his Local Table Book of 1838-46.

So, it would seem that however florid a tale may become with the telling and re-telling, sometimes there is a kernel of truth in it!!

All images by Lenora unless otherwise stated.

Bath, Jo, Charmers, Enchanters and Witches: True tales of Magic and Maleficia from the North East [3]

Raine, James, Depositions and other ecclesiastical proceedings from the courts of Durham,extending from 1311 to the reign of Elizabeth Vol 21, published by the Surtees Society, 1845 [1]