On the 28 April 1721 the London Gazette reported on the Governments attempts to quash the nefarious activities of a group of young persons, both men and women, drawn from the cream of society, whose outrageously irreligious behaviour was thought to be causing moral anarchy and endangering the very fabric of society.  Although not named directly, the main target of the King and the government’s legislation was the notorious Hell-Fire Club.

His Majesty have received Information, which gives great Reason to suspect that there have lately been and still are, in and about the Cities of London and Westminster, certain scandalous Clubs or Societies of young Persons who meet together, and in the most impious and blasphemous Manner insult the most sacred Principles of Holy Religion, affront Almighty God himself, and corrupt the Minds and Morals of one another;

As soon as the activities of the Clubs became public knowledge, moral panic and prurient interest walked hand in hand and the flames of public interest were fanned enthusiastically by the press.  The early eighteenth century was a time of coffee houses and clubs where newspapers were widely circulated, read and re-read, often read out loud to those who could not themselves read.  The news that there was a blasphemous secret society or club, right in the heart of London’s high society was a sensation.  People clammered for details of the clubs membership and activities.  It was even rumoured that one of the Queen’s Ladies in Waiting was a member – leading King George I to order an investigation of his own household.

The Club was alleged to have met in Westminster, Conduit Street and Somerset House and the illustration below published in 1721 in a pamphlet entitled ‘The Hellfire Club: kept by a society of Blasphemers’ shows an imagined meeting of the Somerset House Hellfire club. 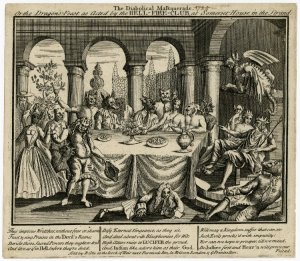 ‘The diabolical maskquerade, or the dragons-feast as acted by the Hell-Fire-Club, at Somerset House in the Strand’. 1721 © Trustees of the British Museum

According to Appleby’s Journal, reporting after the club had come to public attention, the Hellfire club comprised about 40 persons of whom, scandalously, 15 were ladies of quality.  Appleby’s also reported that members routinely dressed up as Biblical characters, took the names of patriarchs and sought to mock Christianity.  They imbibed ‘Hellfire punch’ and dined on Holy Ghost Pie (an imitation host made with angelic root), Devils Loins and Breast of Venus. It was also claimed that if a member died they became the club’s ‘Ambassador in Hell’.  One can almost imagine Appleby’s Journal as the ‘Daily Mail’ of its day – with stolidly respectable readers being at once shocked, outraged and titillated by these antics. 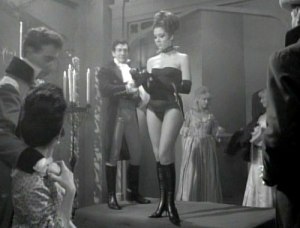 A Touch of Brimstone, Avengers, 1966, produced by Brian Clemens and Julian Wintle

From Blasphemy to Satanism

The most damning accusation levelled at the Hellfire club was of mocking the Trinity: nibbling on Holy Ghost Pie while dressed as a patriarch and fornicating with the Lady Hellfire was pretty much guaranteed to get the Establishment frothing at the mouth…. Mists Weekly Journal from 20th February 1720 referred to the Hellfire club as having:

“transcendent Malignity: deriding the forms of Religion as a Trifle.  By a natural Progression they turn to Substance; with Lucifer they fly at Divinity”  concluding that “Ladies shield their faces because of the whiff of brimstone when they pass” (Lord p52)

Actual reliable evidence about the activities of the club is extremely scarce, as Evelyn Lord points out in her book ‘The Hell-Fire Clubs: Sex, Satanism and Secret Societies’. Most of the alleged activities reported above appeared in Journals well after the club’s existence was exposed.  And, even in their lurid and oh so very tabloid accounts, evidence of actual Devil Worship seems limited to toasting the devil and generally misbehaving.  So why then, did the Hell-fire club(s) gain a reputation for Satanic practices?

The answer seems to lie in the mind of Bishop Wake the Bishop helped to draft the Bill against the Hell-fire club(s).  His main aim was to uphold Anglican Orthodoxy and the settlement of 1688 against the rise of Jacobitism and the perceived Catholic threat following the failed Jacobite uprising in 1715.  He considered that anyone denying the Trinity must ipso-facto be in league with the Devil.  Hence the Hell-fire Club’s activities fell by default into the category of not only blasphemy, but effectively Satanism as well.

But was there more to the suppression of the Hell-fire club than upholding the state religion and protecting the morals of the nation?  It would seem so…

The man behind the Diabolical Maskquerade 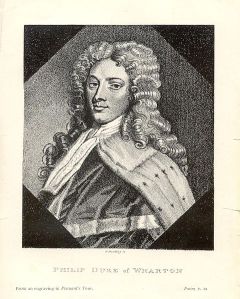 Enter Philip, Duke of Wharton.  Brilliant, charming, charismatic, rebellious, debauched, rake-hell and libertine extraordinaire.  The dyspeptic Alexander Pope described him as: “The scorn and wonder of our days” (Cruikshank p390)

Philip was born in 1698 the grandson of a Puritan (!), son of the author of the Lillibularo and Lucy Loftus (a lady whose beauty had been the toast of the famous Kit Cat Club).

Philip was given a vigorous education, ranging from maths to metaphysics, the classics to Shakespeare.  He also excelled at languages and was a talented mimic.  Destined for a fast-track career as a statesman, his family were horrified when at 17 he eloped with the daughter of a penniless Major-General.  It was rumoured that his father was so distraught that the marriage could not be annulled that he died only weeks later.  No doubt a sad event, but one that left the wild-child heir free of paternal control.

In order to reign in the wayward heir, he was packed off by his trustees on a Grand Tour of the continent.  Not the usual fun places like France and Italy where a good time could definitely be had; but to the austerely protestant Holland, Hanover and Geneva.  However this dull itinerary did not suit the wayward Duke, he ditched his tutors in Geneva in 1716 and headed directly for the epi-centre of sophistication and the heart of the Jacobite court in exile – Paris.  Here an anecdote relating to his meeting with a Jacobite exile named Gwynne, living in a Parisian garret, which reveals his already outrageous personality:

“Philip said he hoped the stairs didn’t lead up to heaven, because if they did he would go down again, and invite Gwynne to join him in Hell, where he was to be the Devil’s lord of the bed-chamber”  (Ashe p52)

After various other brushes with the Jacobite court in exile, including a meeting with the Old Pretender himself, Philip returned via Ireland to England.

Perhaps concerned by this prominent figure’s Jacobite exploits, George I gave Philip a Dukedom in 1718. If he hoped it would cement his loyalty, George was wrong.  Taking up his role as statesman Wharton soon became a vociferous critic of Robert Walpole, the de-facto Prime Minister of England and representative of Whig party interests.  In his opposition to Walpole and the Whig parties hold over politics Geoffrey Ashe, in his book ‘The Hell-Fire Clubs’, credits Philip with political importance as being the first to see opposition to the Whig ‘stranglehold’ on eighteenth century politics and patronage as crucial.

Given his unconventional and rebellious nature it is unsurprising that Philip was the founding member and creator of the original Hell-fire club.  As noted above Clubs were all the rage in the very sociable eighteenth century – and not all of them were as respectable as the Kit Cat Club. In 1712 the Mohocks, a gang of gentlemen, terrorised London with their violent antics; and Daniel Defoe wrote of “a pagan circle, near Old Charing, where God was owned, sworn by, imprecated, blasphemed, and denied all in one breath”. (Lord p47).

Wharton appears to have started the Hell-fire Club at sometime in 1720.  Evelyn Lord notes that his son died at about the same time, Wharton had left his wife and began associating with the unpleasantly nick-named ‘Rape Master General’: Colonel Charteris.  Perhaps the two of them dreamt up the Hellfire Club as the ultimate rebellion against the solidly mercantile respectability promoted by Georgian Society.

Members were said to include Viscount Hillsborough and Sir Edmund O’Brien.  It was rumoured the famous Lady Mary Wortley Montagu was also a member. Evelyn Lord comments that Lady Mary first met and became friends with Wharton when he was living in Twickenham in 1722 – a year after the club folded.  Lady Mary appears to have written about a later club called the Schemers ( an orgiastic club set up by Lord Hillsborough) and this reference has become conflated with that of the Hellfire club. Her evident friendship with the scandalous duke added fuel to the fire and her name became linked to the Hellfire club.  (Lord p58).

The reasons that the Government feared clubs such as the Hell-fire club was that they could be hot-beds of sedition.  England in the first quarter of the eighteenth century wasn’t the bucolic fantasy of Fielding’s Tom Jones. Ever since the Glorious Revolution of 1688, when the protestant William of Orange had supplanted the Catholic James II, the Anglican’s had been edgy. 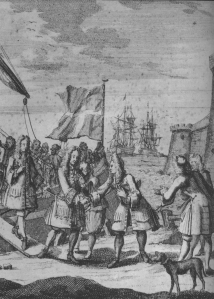 The Old Pretender Lands in Scotland, 1715. Public Domain via Wikimedia

The Government needed a tame clergy but not one with pretensions to Catholic style priestly interventions with the divine.  Hence the Convocation of the Church of England (who favoured this  view) was suspended in 1717.  The remaining clergy became pluralistic ‘yes-men’.  Nevertheless maintaining the illusion of their moral authority was still important to the Establishment – especially after the failed Jacobite rebellion of 1715.  Add to this the disastrous South Sea Bubble Speculation that bankrupted everyone from Dukes to housemaids and the stability of early Georgian Society comes seriously into question.  Many people genuinely believed that the nation was being punished by God – so in the popular mind having a society of blaspheming Devil Worshipper’s at large in the capital might have been seen as a symptom of the declining morals of the nation and further anger God.

Neither could the government risk having possibly seditious secret societies such as the Hell-fire Club, run by a suspected Jacobite sympathiser, remain unchecked as they felt it could risk political instability and moral anarchy.  Add to this the personal enmity between Wharton and Walpole (who was the prime mover behind the Act) and it becomes clear that the Hell-fire Club’s days were numbered.

The Club, which had run for less than a year, was finished by 1721.  Banned by an Act of Parliament – although nobody was ever prosecuted.  The Duke of Wharton eventually left England and died in debt at the age of only 33 after a characteristically eventful exile.  He was eventually immortalised in fiction as the anti-hero Lovelace in Samuel Richardson’s novel ‘Clarissa Harlowe’.

The Hellfire club however, did not disappear from memory.  As well as the Grub Street Hacks who did much to create its infamy, many respectable persons wrote of it in their memoirs:  Mrs Delaney, William Whiston and others.  And it spawned many other Hellfire groups – particularly in Ireland (Wharton had spent some time in Ireland – even charming the notoriously misanthropic Dean Swift, of Gulliver’s Travels fame).  Many of those Irish clubs had much more claim to a Satanic reputation than Wharton’s club of blasphemers.

One final legacy left by the original Hellfire Club was that Wharton, in his will bequeathed what was left of his estate to the Lord Treasurer, one George Doddington.  ‘Bubb’ Doddington would later become infamous due to his association with perhaps the most famous Hell-fire club of all: The Monks of Medmenham.  But that is a tale for another day!