When I first found out about  Wicked Jimmy, otherwise known as Sir James Lower 1st Earl of Lonsdale (1736 – 1802), my imagination ran wild with visions of Lon Chaney or Vincent Price skulking around in cobwebbed castles and dank dungeons getting up to suitably nefarious deeds.   A little digging and I came up with more equally intriguing nick-names: Jemmy Grasp-all, The Gloomy Earl and  most delicious of all The Toadstool Earl – just who was this man, and why did he end up with so many unflattering sobriquets?

Well, James Lowther was a very, very, very rich man.  He inherited not one, not two, but THREE fortunes making him one of the Georgian era’s wealthiest individuals.  One of his fortunes alone (Coal mines, harbour trade, and lots of lovely money) came to a quarter of annual British Exports at the time(1). 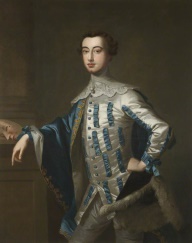 Despite being born with the proverbial silver spoon, it seems he may not have enjoyed a happy childhood.  His first fortune was inherited from his father who died when James was only 9 years old.  John Sharpe a Local Historian believes that his widowed mother pushed him into becoming ruthlessly ambitious – it would seem that Pushy Parents aren’t a new phenomena.

Sent away to boarding school he found himself the target for bullies – English Public Schools at the time could be brutal places. Nevertheless he soon graduated to the top of the pecking order and became a bully himself – a characteristic he seemed to have maintained all of his life.

How the Earl got his Ninepins

Despite his great wealth, Sir James’s lust for power set him on the path of politics.  Politics in the eighteenth century was a shady business and Sir James seems to have had a natural flare for political skullduggery.  He entered politics in 1757 in Cumberland, and soon proved adept at rigging elections and controlling boroughs.  He also seems to have been good at spotting talent because he helped William Pitt the Younger to enter politics in the 1781 as MP for Appleby.  Pitt then had a stellar political career and became Prime Minister at only 24 years of age.   The Earl received lucrative kick-backs a plenty from his grateful prodigy including the Earldom of Lonsdale. 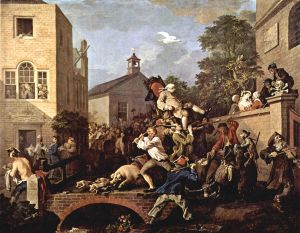 The Gloomy Earl ended up controlling 9 Parliamentary Boroughs in the North West of England and they became known as his ninepins.

The Toadstool Earl and the Mushroom Election

Wicked Jimmy was a name that seems to have attached to the Earl after his death, however The Earl of Toadstool was a name he picked up during his lifetime.  The Earl decided to win the Carlisle seat for one of his relatives and to do so he manipulated the electorate by creating 1400 honorary freemen to vote in the election.  The new freemen were made up of men who were subservient to the Earl – his tenants and workers – and could be relied upon to vote as directed.  The election of 1786 became infamous as the ‘Mushroom election’ because of its mushrooming electorate.

It can often be observed that rich people stay rich by not spending their money – and the Earl was noted for being a fabulously wealthy skinflint.  Unfortunately, one other way the rich stay so rich is by exploiting the masses and Sir James not only exploited his dependents in elections, but he also exploited them in the workplace.  He was a mine owner and his lack of investment in making his mines at Whitehaven safe cost the lives of both workers and pit-ponies in 1791.

He also ensured that the Poet William Wordsworth grew up in poverty.  Wordsworth’s father was agent to The Earl and he died in 1783 with the Earl owing him £5000 (a huge sum in the eighteenth century).

Madman, too influential to be confined(2)

Despite being known as the Gloomy Earl, he was also a fiery character and was not averse to riding 300 miles between Lowther and London and covering the distance in only 36 hours.  He was also a bit of a speed freak and was notorious for driving at break-neck speed – regardless of whether he was passing through a village or not.  I can’t imagine that he was popular in the locality.

The Earl was also fond of a good duel and in 1792 he and a Captain Cuthbertson seem to have had an early Road Rage incident which resulted loud words followed by pistols at dawn to satisfy honour.

Wicked Jimmy and a love that will last for ever….

Wicked Jimmy was a noted ladies man, just because he married the daughter of the Earl of Bute in 1761 didn’t mean he wouldn’t continue to keep mistresses.  Such behaviour was hardly unusual amongst eighteenth century noblemen, and plenty of aristocratic women also took lovers as well (although if they got caught in the act the consequences were far harsher than for the men). 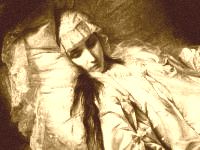 One of the more lurid stories that has attached itself to the Earl relates to the beautiful daughter of a tenant whom he seduced.  Legend has it that the girl became his mistress and he kept her in great luxury.  However the girl died young and the Earl was so distracted by grief that he refused to admit she was dead.  When the servants complained about the smell, he is said to have dressed her corpse himself and often dined with her decaying body seated next to him.  Eventually he is said to have had her placed her in a glass coffin. She was finally laid to rest 7 weeks after her death.

If this is true then one can only imagine what the girl’s family must have felt.

Ernest Jones, writing in 1931 in ‘On the Nightmare’ said that such necrophiliac behaviour was rooted in the idea that:

“The dead person who loves, will love forever and will never be weary  of giving and receiving caresses.”

If this story is true, then perhaps at least some of the Earls bluster and bullying was a front for his own lack of self-esteem (he was, after-all,  bullied as a child) or perhaps it was a consequence of the early loss of his father making him unable to cope with separation from someone he loved.  Or perhaps he just couldn’t bare the thought that one of his ‘possessions’ had eluded him by dying.

Whatever the truth behind this very Gothic story, it certainly adds a very macabre twist to the legend of Wicked Jimmy Lowther.

The Earl died on 24 May 1802, and it is said that on the anniversary of his burial, if the moon is full, his spectre can be seen driving his carriage at break-neck speed through the grounds of Lowther Castle.

Lowther Castle is open to the public:
http://www.lowther.co.uk/index.php/visiting-lowther 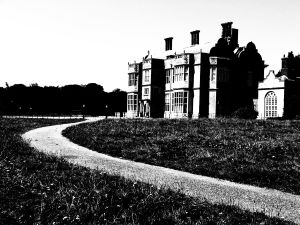 The Approach to Felbrigg Hall

Felbrigg Hall is situated amidst vast parklands in North Norfolk and is one of the finest houses in East Anglia.  Originally the home of the Felbrigg family, the land and house was acquired in the fifteenth century by the Wyndham’s.  Its Jacobean facade hides elegant Georgian interiors that speak of the Wyndham/Windham’s tastes and fancies over the centuries.

Although the last Wyndham died over 200 years ago and the home has been in the hands of the National Trust since the 1960’s, not all of its past residents seem eager to quit their former home.

One such tale tells of an elderly woman, once a parlour made in the Hall, recounting how she and other maids would find that their candles were mysteriously extinguished when ever they passed by a particular door.  A female voice would beckon them to enter the chamber but the room was always found to be uninhabited…

By far the most famous spirit inhabiting the hall is that of William Windham III (1750 – 1810) known as ‘the fighting Windham’ for his sporting prowess.

William Windham was a noted orator and a prominent statesman for much of his life. His career spanned the American War of Independence, the French Revolution and the Colonial Wars of the early 19th Century; but the over-riding passion of his life, and the cause of his tragic death, was his love of books.  The wonderful Gothic library at Felbrigg, designed by James Paine in the 1750’s, was filled with books both William II and William III each brought back from their Grand Tour.

William was to meet his fate one summer evening in 1809. As he returned to his home in Pall Mall, he noticed a fire had taken hold in a house on Conduit Street very close to the residence of his friend Robert North.  Windham knew that his friend had a very valuable library and he immediately set about the rescue operation.  He and three others succeeded in rescuing most of the valuable manuscripts.  The rescue was not without its price though as William fell and bruised his hip.  The bruise became a tumor and the tumour needed to be operated on.  Operations in the early nineteenth century were brutal affairs, and William died as a result.  His final words, addressed to his physician were:

“I thank you; this is the last trouble I shall give you.  You fight the battle well, but it will not do.”

His body was buried in the family vaults at Felbrigg Church a stones throw from the Hall…and the spectre of William Windham can occasionally be encountered in the dark and shadowy Gothic Library.  He has oft been found standing by a table when his favourite volumes were laid out; or ensconced in an easy chair, by a roaring fire, engrossed in some favourite book.  It would seem like a pleasant way to spend eternity.

Leaving the hall and walking about the grounds you soon find yourself amidst the dark woods of Felbrigg where oaks, sweet chestnuts and conifers hold sway.  Here you may cross paths with ‘Mad Windham’ driving his phantom coach through the trees.  And a spectral wind rising out of nowhere and disappearing as suddenly as it arose, may cause more than a whisper amongst the leaves….