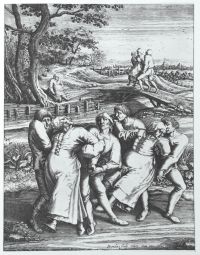 Image by Pieter Breugel the elder

Amidst our people here it come
The madness of the dance.
In every town there now are some
Who fall upon a trance.
It drives them ever night and day,
They scarcely stop for breath
Till some have dropped along the way
And some are met by death[1]

On the 14th July 1518, Frau Troffea left her house and went outside.  Suddenly from out of nowhere she began to dance.  Dancing awkwardly and uncontrollably, with arms and legs jerking in all directions, she jumped and twisted and twirled her way through the streets of Strasbourg. Frightened and bewildered neighbours came out of their houses to watch her strange progress.  Unbeknownst to them, that day was the beginning of what became known as the “Dancing Plague of Strasbourg”.

For between 4 to 6 days, Frau Troffea danced day and night.  Despite suffering from complete exhaustion, she could not rest.  By the end of the week, 34 people had joined her and within a month about 400 men and women were tearing their way through Strasbourg in this non-stop frenzied dance.  Many of the exhausted dancers died, often due to heart attacks and strokes, their bodies continuing to make jerking movements even in their final death throes.

Physicians consulted by the city’s authorities ruled out astrological or supernatural causes and instead put the cause down to a natural disease which they called “hot blood”.  Oddly enough their remedy was to keep the dancers in perpetual motion as they believed that the citizens would only recover if they danced continuously.  To this end it was decided to open up two of the city’s guildhalls and the grain market and to erect a wooden stage, all to encourage and facilitate the dancers.  Musicians were even hired to accompany them.

In a last desperate attempt at a cure, the dancers were loaded onto three large wagons and taken to the shrine of St Vitus near Saverne. Priests were employed to say mass for each group.  After paying a donation of one pfenning, each of the dancers was given a gift of a cross and a pair of red shoes which had been sprinkled with holy oil.  Led around the altar in groups, the priest made the sign of the cross over the soles and tops of the shoes and sprinkled holy water on the afflicted men and women.

Mysteriously as it had begun, the epidemic ended.  The fate of the first dancer, Frau Troffea is not known but she had initiated the last, most famous and largest outbreak of the dancing plague.

Written documents mention at least ten other outbreaks of dancing plagues in Germany, Belgium and the Netherlands.  Known as the “St Vitus Dance”, the earliest incident is recorded having occurred in the 7th century.  Despite the association with Saint Vitus, the characteristics of each incident varied, with the smaller outbreaks confined to members of an extended family group or close neighbours.  An outbreak in 1237 involved a group of children jumping and dancing their way from Erfurt to Arnstadt, an event that shows a surprising similarity to Hans Christian Andersen’s story of the Pied Piper of Hamelin.  Forty years later, 200 people were reported to have started dancing frantically over a bridge, resulting in the bridge giving way.  The first major documented case occurred in Aachen in Germany on the 24 June 1374 where a group of people were seen foaming at the mouth, dancing wildly in the streets and shrieking about wild visions.

Some believe that these incidents were organised events, purposely started to generate frenzy and hysteria but evidence from witnesses all report that the dancers appeared in a trance like state with no sign of pleasure on their faces. Indeed the fact that so many begged for help to stop tends to suggest that the participants were unwilling victims who had temporarily lost control over their own bodies.  Remedies could vary with victims being exorcised, isolated or being taken on pilgrimages ending at a shrine or chapel dedicated to St Vitus.

Even stranger aspects to the contagion involved shoes and the colour red.  Some of the dancers were described as having an extreme hatred for pointed shoes, whilst others took immense pleasure from having their feet hit! In the folklore of many northern countries, red was seen as an extremely powerful colour.  It could

be viewed as good, symbolising the martyrdom of Christ as well as being the colour of love, fire, health, healing and joy.  Red was also worn to ward of the evil eye. On the other hand, red also signified vanity and female sexuality and was associated with the devil and witches.  Often those involved in the dancing epidemics were reported as being unable to perceive the colour red and some of the afflicted dancers became violent when confronted by red objects.  This reaction could suggest that some of the dancers believed that they had been possessed and it is noticeable that one of the healing gifts given by the priests to the afflicted citizens of Strasbourg was shoes, coloured red.

The root cause of these outbreaks was unknown at the time and even today it is a considered a historical mystery.  A number of theories have been put forward by both historians and scientists in an attempt to explain the phenomenon but many of these are about as plausible as the “hot blood” theory of the physicians of Strasbourg.  One of the least convincing arguments is that the participants were suffering from the condition known as ergotism.  Ergot poisoning from rye infected with a specific type of mould can cause a number of symptoms such as psychosis, mania, spasms and seizures.  Although movements could be jerky, contemporary sources describe the movements of those afflicted as more akin to dancing than seizures or spasms.  Other explanations include mass hysteria, collective mental disorder and religious ecstasy due to excessive veneration of St Vitus.

The author John Waller in his fascinating book “A time to dance, a time to die” puts forward another more convincing theory.  He notes that the outbreaks often coincided with periods of extreme suffering.  The incident at Aachen followed the devastation of the Black Plague which occurred between 1348 and 1350 and killed between 75 million and 200 million people reducing the population of medieval Europe by about a third.  The Strasbourg event was also at a time of extreme famine, poverty, fear of invasion by the Turks and arrival of syphilis into the community as well as a horrific epidemic of a disease known as the “English sweat”.  John Waller suggests that the combination of extreme psychological distress, pious fear and their belief in spiritual possession enabled the power of St Vitus to take over their minds and inflict a compulsive dance.  He also remarks how these epidemics disappeared in the 17th century once Protestantism became the dominate religion of Northern Europe leading to the cult of St Vitus dying out.

The Cult of Saint Vitus 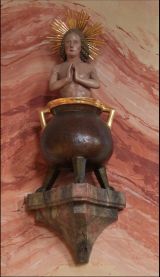 A Christian Saint from Sicily who was believed to have escaped unscathed from a boiling cauldron of tar and molten lead, Saint Vitus died a martyr at the hands of the Romans in the 4th century.  He was also one of the fourteen holy helpers of the Roman Catholic Church whose intervention was believed to be particularly effective combating certain diseases.

Saint Vitus day was celebrated on the 15th June according to the Julian calendar and it can’t be a coincidence that the outbreaks of dancing mania in Aachen and Strasbourg occurred around this date.  Worshippers in Germany and Latvia celebrated the day by dancing in front of his statue.  Sydenham’s Chorea, the neurological disorder which became known as “Saint Vitus Dance” caused those stricken to suffer from rapid, uncoordinated jerking movements of the feet, face and hands. It is understandable that many people believed that those involved in the dance manias were believed to be suffering from this disorder. Vitus became known as the patron saint of dancers, entertainers, comedians, epileptics as well as giving protection against lightning strikes, animal attacks and oversleeping. 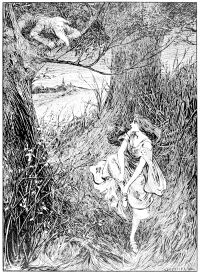 On a final note I just wanted to mention a lesser known and quite unpleasant fairy tale by Hans Christian Andersen. In the story, a poor girl named Karen is adopted by a rich old lady and becomes spoilt. The girl tricks her mother into buying her an expensive pair of red shoes fit for a princess.  Defying her mother, Karen wears the shoes repeatedly to church, ignoring the disapproval of the whole community and even the holy images. Karen’s obsession with her shoes results in her leaving her sick mother so she can attend a party.  On the way she meets a man who remarks on her beautiful dancing shoes.  After this encounter she begins to dance frantically and uncontrollable tearing her skin on the brambles.  Unable to stop dancing she is prevented from attending her mother’s funeral.  An angel appears to Karen and tells her that her vanity has condemned her to dance even after death.  Eventually in desperation she finds an executioner who cuts of her feet.  He makes her wooden feet and crutches.  Her amputated feet continue to dance in the shoes barring her way when she tries to enter the church.  After a long period of repentance and prayer, the angel again appears to Karen and grants her mercy, her forgiven spirit flying to heaven.  An even grimmer version of the story has the girl failing to find salvation and condemned to continue to dance until she was nothing more than a skeleton.

I don’t know if Andersen based the fairy tale on the dancing epidemic but considering he was born in the same geographical region; it is unlikely that he would have been unaware of the incidents.  There are too many coincidences, the non-stop dancing, the shoes, the colour red, the religious association, although here unlike for the Strasbourg dancers, the red shoes became the curse and not the cure.