The Victorian Way of death 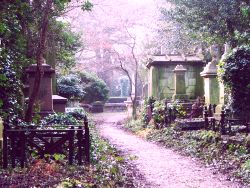 Pathway amidst the graves

It was a crisp March day when I found myself making may way down Swains Lane, the lane that cuts through West and East Cemeteries.  I had always wanted to visit Highgate Cemetery, it features in so many of my favorite old horror films such as Tales from the Crypt and From Beyond the Grave (and always appears in my imagination accompanied by an overblown 1970’s horror soundtrack and maybe the odd scream as well…)

You would be unwise to wonder around Highgate Cemetery alone, many of the graves and monuments are fragile and a wrong step off the path could lead the unwary to spending some time up close and personal with a cadaver in a lead-lined vault that could be up to 30 feet deep. The cemetery is vast and has many secluded spots so rescue, should it even come, could be slow indeed….

Don’t be put off by taking a guided tour, touristy it might be, but it is also informative and the cemetery doesn’t lose any of its magic, especially if the group isn’t too large.  The guides are knowledgeable about the famous and not so famous persons buried here, and can help decode the Victorian language of death which written all over their tombstones if you have eyes to see it.  You only have to look at some of the more morbid Victorian paintings (dead shepherds, pining loyal hounds etc) or remember that they often had one last family photo taken with the dearly departed, to know that their attitude to death was very different from our own.

The Circle of Lebanon

One of the first things that struck me about the cemetery was how different it was to modern cemeteries.  Now gravestones are in formal rows, with standardised inscriptions – compared to Victorian exuberance (all weeping angels, obelisks and broken columns) – our way of death seems clinical and regimented.  In a modern cemetery you would never get such a tragic description as that of Emma Wallace Gray who died in 1854 at the age of nineteen “From the effects of her dress having caught fire”.  Her inscription reads thus:

In bloom of youth, when others fondly cling
To life, I prayed, mid agonies for death
The only pang my bleeding heard endur’d
Was, thus so early doomed to leave behind on
Earth those whom I so dearly lov’d.

The architecture too is something you would never find in a modern cemetery, the 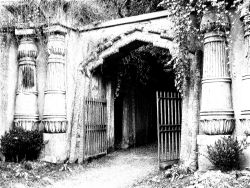 Entrance to the Egyptian Avenue

picturesque chaos of the tombstones and mossy angels hidden amongst the trees all overgrown with grasses and wild flowers.  And the monumental grandiose mausoleums; the eerie circle of Lebanon with its use of the natural landscape – the mausoleum is crowned by a Cedar of Lebanon; the austere Terrace of Catacombs cut into the hillside; and of course the fabulous Egyptian Avenue (and the Egyptians knew a thing or two about death).  Walking through the dramatic gateway into the dank alley’s of the Avenue I truly felt like I was walking into another world – a city of the dead.

Highgate and the Macabre

No Victorian cemetery would be complete without some macabre tales, and the one that stuck me most was that of Elizabeth Siddall.  Elizabeth was the beautiful wife and muse of Dante Gabriel Rossetti, one of the foremost Pre-Raphaelite painters, and herself a talented artist.  Elizabeth died tragically young, only 32, possibly as a result of addiction and depression.  She was buried in 1862 by a grief-stricken Dante Gabriel who tenderly placed a sheaf of manuscript poems by her cheek – how romantic.   But Elizabeth was not to rest in peace for long.  In 1869 Dante Gabriel must have been feeling considerably less grief-stricken and romantic because he ordered her exhumation in order that he could retrieve his manuscript….Hmm.

The Ham and High Gazette from March 1970

One thing that the tour did not mention was the legend of the Highgate Vampire.  This legend seems to have begun sometime in the late 1960’s, the cemetery was neglected and overgrown and attracted not only vandals but those interested in the occult.  There appears to have been some reports of strange goings on the cemetery and in Swains Lane: reports of dead foxes and of a tall dark figure with burning red eyes (Christopher Lee – I wonder?) scaring dog walkers and generally lurking in a sinister way.

In 1970 an occultist called David Farrant contacted the local newspaper the Ham and High Express and the legend was born…further sightings were recorded (although accounts often varied) and it was proclaimed by Farrant that the figure had Vampiric characteristics and that he and the British Occult Society that he was part of would exorcise it.  Another flamboyant figure, Sean Manchester, appeared at about this time.  The ‘Bishop of Glastonbury’*[please refer to comments section for more information] soon became a rival vampire hunter and a bitter enemy of Farrant (so much so that the best ‘hammer horror’ tradition he is alleged to have challenged his nemesis to a magical duel).

Whatever the truth of the legend, the impact was devastating. On the night of the ‘vampire hunt’ hundreds of ‘vampire hunters’ (many valiantly armed with cans of beer), stormed the police cordon around the cemetery and began basically trashing the place. Needless to say no vampire was found.

During the whole Highgate Vampire frenzy not only were monuments damaged but vaults were broken into, corpses attacked and even beheaded.  One gruesome story is that a local resident found a headless corpse sitting behind the steering wheel of his car.  This might sound funny, but really, it’s not, these desecrated corpses were not vampires or demons, just  ordinary people who had hoped to rest in peace.  Perhaps the real vampires of Highgate were Farrant and Manchester who fed off the media hype they  created.

Burials are still carried out in the Cemetery, and one of the modern interments the tour visited was that of Alexander Litvinenko the Russian exile and spy buried in 2006.  Litvinenko was poisoned using Polonium after taking tea with two of his Russian contacts, he died from the effects of the posion. I still remember the news footage showing him fighting for his life in his hospital bed.  He is buried here because the Victorian vaults are lead lined and therefore radiation proof.

His  story reminded me that everyone buried in Highgate, however long ago, was once a living breathing individual with their own personal story.  And that one day, despite our iphones and our apps we will all be dust just like them.

My final thoughts on Highgate Cemetery are best summed up by one if its famous incumbents, Christina Rossetti the poet. 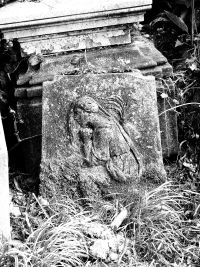 When I am dead, my dearest,
Sing no sad songs for me;
Plant thou no roses at my head,
Nor shady cypress tree:
Be the green grass above me
With showers and dewdrops wet:
And if thou wilt, remember,
And if thou wilt, forget.

I shall not see the shadows,
I shall not feel the rain;
I shall not hear the nightingale
Sing on as if in pain:
And dreaming through the twilight
That doth not rise nor set,
Haply I may remember,
And haply may forget.