In the dark and cobweb-filled corridors of the Haunted Palace, faint scribblings and mutterings can often be heard eminating from the book-strewn chambers high amongst its ivy-clad towers.  Lenora and Miss Jessel are custodians of an extensive library of peculiar tomes, from which they draw their ideas.  But one thing is missing from the library: a book of their own.  But not for much longer.

Yes, after 7 years and close to half a million views (thanks to you, our wonderful readers), Lenora and Miss Jessel have decided to publish a collection of a few of their favourite posts.

Just to make it extra special, and because copyright is a thing, we have commissioned two talented young artists to produce images for our book.

Naturally, because we at the Haunted Palace love all things creepy, we aim to publish our book for Halloween 2020. There’s a long way to go, but the cogs are turning!

In the meantime, we’d like you to meet the Haunted Palace artists in residence…and maybe give you just a teaser of what to expect in our book…

Iga Pencak studied and Central St Martins and VCA in London, and graduated in Theatre and Screen Costume Design. She is a talented portrait artist, costume designer and milliner. She has worked on large-scale mural projects and led community art workshops with Rohan Hall aka Chickenstein_.

And find her at:

Rohan Hall aka Chickenstein_ is a freelance artist and is currently studying for his undergraduate BA degree in Illustration at Newcastle college. He has worked on large scale mural projects and led community art workshops with Iga Pencak. 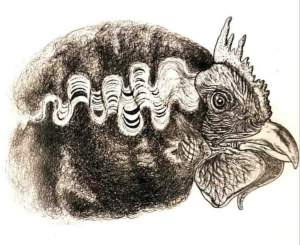 The Bride of Chickenstein, pencil sketch, by Rohan Hall

Memorial for Billy, acrylic on stone by Rohan Hall

Iga is producing the cover-art and full-page images for each section in the book.  She begins the process with a pencil sketch, then inks the images prior to digitalising them for publication.  Here are two of her works in progress.

First, for our ‘History’s lost and found’ section, which will include such dark tales as the dancing mania of the middle ages and the firey fate of the ladies of the ballet blanche, she came up with this darkly dynamic design:

Ballet shoes and skull, pen and ink, by Iga Pencak

Secondly, for this macabre sketch, for our suitably named ‘Macabre’ section, in which you will find such delights as a day out at the Paris Morgue, Iga was inspired by our post about Enon Chapel and its sinister secret.

Rohan will be creating smaller images for each individual post. He begins the process by creating a pencil sketch, he then digitalises the image for publishing.

He as already produced two very atmospheric images,  for folktales The King o’ the Cats and Hell-hounds, Hyter Sprites, and God-fearing mermaids (as well as producing our logo – see the about us page) 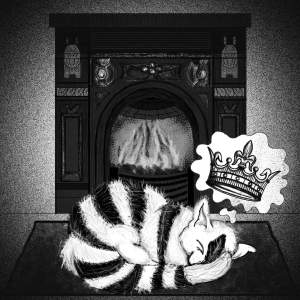 The King O’ the Cats digital sketch by Rohan Hall

We’ll still be posting our usual brand of in-depth darkness, but expect a few updates on how our book is progressing along the way!

We hope you will enjoy it.