Benjamin Franklin at his Armonica by Alan Foster, 1926
(cover from “Etude Magazine”, January 1927)

I first came across the glass harmonica or glass armonica when reading Lydia Syson’s excellent book ‘Doctor of Love: James Graham and his Celestial Bed’ while I was researching that fabulously eccentric eighteenth century sexologist.

Of the many extraordinary and complex musical instruments that enjoyed often brief vogue in the eighteenth and early nineteenth centuries, the eerie tones of the Glass Harmonica seemed to fit perfectly into the growing urge for sensation and sensibility.  Graham was no stranger to the glass harmonica, and being an early fan of music therapy he employed it to great effect in his exotic Temple of Health and Hymen.

Other fans included Anton Mesmer, famous proponent of Animal Magnetism and Mesmerism, who used the intense celestial music of the glass harmonica to help guide his patients into a deep trance.

The instrument enjoyed popularity in Britain, Europe and America and over 100 pieces of music were written for the instrument during its heyday including works by Mozart, Bach and Beethoven.

Benjamin Franklin and the glassychord

The glass harmonica – briefly called the ‘glassychord’ – was a technical upgrade on the ‘wineglass filled with water’ branch of music (a popular form of music in the early eighteenth century); it was developed by none other than Benjamin Franklin during his time in England as Colonial Agent.

Franklin was inspired to create his glass harmonica, or armonica as he later named it, following Edmund Delavals performance on the wine glasses in 1758.  OK, its not as low brow as it sounds, this form of music has been around for hundreds of years, and was very popular.  It was given some very dignified names: Seraphim, Glass harp and (titter ye not) the Angelic Organ.

Franklin (always a fan of more popular than high-brow music) loved the sound of the glasses, but wanted more harmonies in his music (American’s are so demanding LOL) so he set about re-designing the instrument.  Wikipedia describes his innovations thus: “an instrument consisting of variously sized and tuned glass bowls that rotate on a common shaft, played by touching the spinning glass with wet fingers” 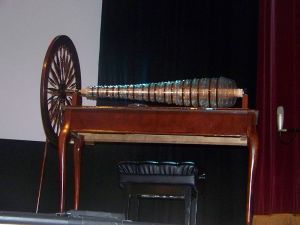 His main innovation seems to have been tipping the glasses on their side and rotating them. Originally the glasses would have rotated through a trough of water.  Franklin also developed a colour coding system to indicate the note that each glass represented.

The Bristol Journal advertised it as:

“The celebrated glassy-chord, invented by Mr. Franklin of Philadelphia: who has greatly improved the musical glasses, and formed them into a compleat instrument to accompany the voice; capable of a thorough bass, and never out of tune. Miss Davies from London, was to perform in the month of January, several favourite airs, English, Scotch and Italian, on the Glassychord (being the only one of the Kind that has yet been produced) accompanied occasionally with the voice and the German Flute.” January 12th 1762, quoted in the Papers of Benjamin Franklin (1)

Its harmonies and melodies were so intense and ethereal that it soon became known as the ‘voice of angels’ and was credited with the power to transport the listener to heightened states of emotion and sensation.

Davies soon became famous for her performances on the instrument, Franklin seems to have had one made for her, whilst keeping one for himself.  She and her sister travelled Europe performing on the instrument to great acclaim.  Davis even taught Marie Antoinette the Armonica.  However, it is her later tribulations with poor health that have helped gain the Armonica its more sinister reputation.

“I had a violent return of my nervous complaints which brought me so low that there were little hopes of my recovery. I was near a twelvemonth confin’d to my Room, and most part of the time to my Bed.”  Extract from a letter from Marianne to Franklin 1783

Marianne eventually died in a mental hospital. It is worth noting she never attributed her illness to her long association with the glass harmonica – but that didn’t stop others making the link. Marianne Kirschgessner was another famous virtuoso on the glass armonica whose career was cut short – some said due to nerve damage caused by the instrument.

Others too, feared the baleful effects of its insanely ethereal tones fearing it could induce hysteria and even madness in listeners.  Tales of deaths during concerts lead to the instrument being banned by order of the police in certain German cities.  People credited it with scaring animals and causing premature births.  Although the eighteenth century was a century of scientific enlightenment, there was also a strong vein of superstition still running through it and some people feared that the otherworldly strains of the glass harmonica would raise the spirits of the dead.  This lead to proscriptions on the instruments usage:  not after midnight, and definitely not near a graveyard.  It may also explain its popularity at magic lantern horror shows.

Although the instrument undoubtedly had its fans:  Mozart, Jefferson, Paganini all adored it – it even featured in Mozart’s final work – it also had its critics:

JM Rogers, writing in his ‘Treatise on the Effects of Music on the Human Body, in 1803 stated:

“Its melancholy tone plunges you into dejection..to a point the strongest man could not hear it for an hour without fainting.”

Thomas Bloch, a contemporary glass harmonica musician provided the following quote from a musical dictionary about the Glass Harmonica’s baleful effects which said its tunes:

“..are of a nearly celestial softness..but can cause spasms” (!)

Suggestions of lead in the paint or glass have been put forward for the instruments unfortunate link with mental illness (Bloch points out that there was a 40% lead content in some glass at that time)…but what ever the cause, it’s association with madness was forever crystalized in the popular mind when Donizetti used it in his 1835 opera Lucia Di Lammermoor.  The eerie piping tones of the armonica emphasis the sense of Lucia’s derangement, following her bloody murder of her bridegroom, in what has become know as the ‘Mad Scene’.

The instrument was popular on both sides of the Atlantic for about a hundred years, but eventually it fell out of fashion.  It’s sinister reputation for destroying the minds of those who played or heard it must have had an impact, but the fact was that the instrument was not an easy one to master and could be very temperamental.  Being made of glass it was delicate, and in depending on water for its tone, it could react badly if the water was either to hard or to soft.  Oh, and it was also a bit fussy about the temperature.

Its other big problem was that as fashions in music moved from the intimate chamber orchestra’s of the eighteenth century to the huge symphonies of the nineteenth, its voice simply got lost in the vastness of symphony orchestras and huge concert halls.  Amplification was simply not possible at the time. 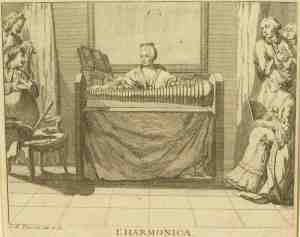 These days flutes can often be found replacing the glass harmonica in orchestras, but there are still a dozen or so players in the world today.  This is largely thanks to a Massachusetts glass blower called Finkenbeiner who began something of a renaissance for the instruments in the 1980’s.  Thanks to this you can still occasionally come across performances with this strange and melancholic instrument to this day.

Here are two examples of the Glass Harmonica in action – but remember – listen at your own peril – you have been warned!

Here Hayoung Lee sings Lucia in the ‘Mad Scene’ from Lucia Di Lammamoor by Donizetti, the performance is accompanied by Glass Harmonica

Thomas Bloch playing Mozart on a Glass Harmonica based on Benjamin Franklin’s design: