The thrill of the supernatural 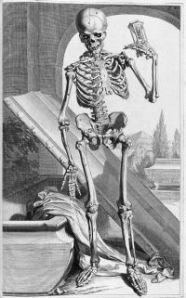 In the past we were not so protected from death as we are now.  Death was not safely stowed away in clinical environments such as hospitals and care homes. Oh no – it was stalking you on the streets, it was in your home, in your bed and in your face.  Perhaps that is why human beings have always sought answers to the question of what awaits us when we finally shuffle off our mortal coil.  And while theologians and thinkers provided comfort and tried to provide answers in the form of religion or philosophy, the ordinary folk came up with folk tales and superstitions to explain the unexplainable.  And the byproduct of this was the delight in a good scare!

The eighteenth century saw the rise of the horror genre in the form of the ghost story and the Gothic Novel: The Castle of Otranto, by Horace Walpole 1765; Vathek, by William Beckford 1786; The Mysteries of Udolpho by Anne Radcliffe 1794; to name but a few.  As well as the quietly chilling pass-time of reading about supernatural events, the eighteenth century also offered a more interactive experience in the form of the wildly popular phantasmagoria magic lantern shows developed from the 1760’s onwards.

The Magic Lantern:  from science to fantasy…

The invention of the magic lantern is credited to Christiaan Huygens and Athanasius Kirchner in the 17th Century.  Kirchner’s early magic lantern was made up of a lantern with a concave mirror and a candle, with a tube at the side housing convex lenses at each end.  The hand-painted glass slide was placed between them.  These early magic lanterns were simple fore-runners of the slide projector and later film projector.

Initially they were used for scientific purposes, however their entertainment value was soon recognised and their purpose became less high-brow with shows featuring pastoral and mythological scenes.  However con-men and charlatans soon saw the potential of this new technology – claiming to be able to resurrect the dead (using magic lanterns as tools). In a world where most people were generally ignorant of science it was easy to prey on superstitious folk by claiming supernatural powers.

During the 18th Century magic lantern shows began to begin the transformation into Phantasmagoria.  JG Shroepfer who ran a coffee shop in Leipzig had an unusual side line in teaching the occult and performing seance’s.  By incorporating the visual effects of the Magic Lantern Shroepfer was able to create a truly memorable séance.  He was a victim of his own success, by the 1760’s his shows were so popular he became a full-time showman but came to believe the spectral images he created were real and eventually became delusional and committed suicide. 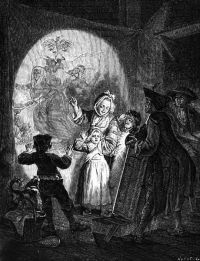 Although there were further developments towards phantasmagoria during the 18th century , particularly in Versailles (Francois Dominique Seraphin with his popular Chinese shadow-play and Edme-Gilles Guyot who experimented with projecting ghostly images onto smoke) it was Etienne Gaspard Robert (1763 – 1837) usually known by his stage name ‘Robertson’ who truly made the Phantasmagoria into the phenomena it became.

Robertson was not the first to combine the popular elements of the séance with magic lantern technology – Paul Philador staged the first true Phantasmagoria show in 1793 in Berlin, Vienna and Paris, however Robertson was the best.

Robertson had a childhood interest in folklore and the occult, and in his memoirs he recalls going so far as to try and raise the devil by killing a cockerel.  As a young man he studied science and art and became particularly interested in optics.  Eventually his interests combined and on 23 January 1798 he staged his first Phantasmagoria.

Robertson’s shows were so popular because of his combination of science and showmanship.  He made significant developments in the use of magic lanterns – developing the ‘Fantoscope’ with improved optics and wheels.  The use of wheels may seem a simple innovation, but it was an important one as it allowed him to create the illusion of images moving or seeming to approach and recede from the audience by adjusting the position of the Fantoscope (an early form of zoom) much to the horror and delight of his patrons – he used this to great effect with his ‘Bleeding nun’ image (an image taken from Lewis’ Gothic Novel ‘The Monk’).

Being an artist he painted his own glass plates and used black backgrounds for his figures.  This coupled with projection on to smoke or transparent screens created the illusion that the images were floating free.  This effect that the images were all around the audience was heightened by the use of multiple moving Fantoscopes and multiple slides allowing images to dissolve into one another (Louis XVI transforming into a skeleton).  He also made good use of darkness and sound to disorient his audience even making use of the eerie glass harmonica to create Mesmer-esque ‘Celestial Harmonies’.  The mechanics of the illusion were also hidden from the audience further causing them to suspend disbelief.

What made these shows so popular?  Timing has to be considered here, Gunning

points out that their popularity coincides with the aftermath of the French Revolution.  The Age of Enlightenment has created a ‘disenchanted’ universe, where science and reason replace superstition and the old religion.  In France this was epitomised by the Revolution.  Rising Gothic Romanticism also increased the popularity of the macabre, mysterious and the psychology of terror.

By time Robertson was putting on his shows in Paris, his audience had lived through the Terror that the Revolution descended into.  The shows began with Robertson explaining the science of the show, the rational explanation behind it all, then seeming to blow all of this out of the water by putting his audience through a terrifyingly real experience.

He didn’t claim that his phantoms were real, and in fact did much to popularise science, yet his audience were prepared to suspend disbelief and for the duration of the show at least, reacted as though what they viewed was real.  Gunning argues that: 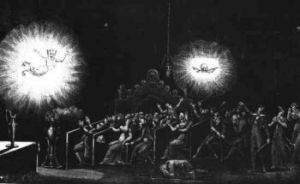 Robertson kept his tricks as secret as possible, but eventually other rival shows took off and for a time Phantasmagoria shows were wildly popular – particularly in England but even being shown as far away as New York.

Photographic slides eventually replaced painted ones, and eventually developments in photography and later cinematography meant the Phantasmagoria became obsolete.  However, many of the techniques pioneered by these early shows influenced early cinema and later on, horror movies.  Both using zoom, dissolving images, stop-motion techniques to create their effects.

Although I have never seen a Phantasmagoria show myself, a couple of years ago in Whitby I experienced a modern version of the genre when I came across a ‘Live’ horror event in the back room of a pub!  A friend and I paid our £5 and stepped into the darkness beyond – not sure what to expect.  We found ourselves thrust head first into a lunatic asylum from a horror film. We were soon screaming and running from axe wielding maniacs and scar-faced Satanists!  When we finally exited, we were both on a total adrenalin high exhilarated by the unexpectedly ‘real’ unreality we had just experienced – it seems not much has changed in the past 200 years!