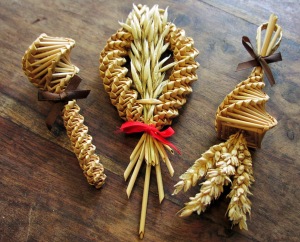 The tradition of the corn dolly has its origins in pre-Christian Britain. At harvest the last sheaf of corn was sacrificed along with an animal, often a hare which was found amongst the crops, to the gods to ensure soil fertility for the next year. Later a model of a hare was made out of straw to represent ‘the continuity of the spirit’[1]. Eventually this evolved into the corn being plaited to represent a figure symbolising ‘the goddess of the grain‘. This became known as a ‘corn dolly’ and was usually hung in a farmhouse’s rafters till the next year.

The corn dolly was a feature of Lammas Day, which in Anglo-Saxon means the ‘Day of the loaf-mass’. Lammas was usually held between the 1st August and 1st September and was the first harvest festival of the year. The ashes of the corn dolly were then ploughed back into the ground during Imbolc[2]. The Celtic festival of Imbolc celebrates the first signs of spring and “commemorates the changing of the Goddess from the Crone to the Maiden”[3].

The Spirit of Fertility

The practice of making the last sheath into a symbol of fertility continued after the introduction of Christianity. It was believed that the spirit of the corn resided in the corn fields. As the corn was cut the spirit was driven further and further back eventually taking refuge in the last remaining sheaf. When the last sheaf was finally cut a large hollow corn dolly was made from it in order to give the spirit a home over the winter. 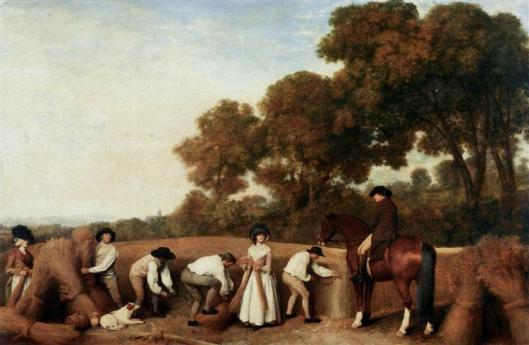 In the majority of places cutting the last sheaf was seen as an honour but in some areas people were fearful of being held responsible for making the Corn Spirit homeless. To prevent being cursed with bad luck often groups of reapers would take turns in throwing their sickles at the sheaf. To be even safer sometimes the reapers would sweep their scythes back and forward across the sheaf whilst blindfolded. In this way the blame was shared.

The Spirit of the Corn returns home

At the next sowing the corn dolly was returned back into the soil either by being fed to the horses, trampled into the ground or sown back into the first furrow ploughed in the spring along with the new planting.

It is not clear where the term ‘corn dolly’ comes from. Some believe that it is either a corruption of the word ‘idol’ or from the Greek ‘eidolon’ which means ‘representing something else’[4].

Corn dolly’ is a generic term but each area had their own name for their doll. Some of these names include amongst others; the Lame Goat, Old Hag, Old Crone, The Mare, The Maiden, The Granny, The Neck, Kirn (Kern) Baby, Old Sow, The Frog, The Hare and the Gander’s Neck.

Corn maiden. Corn dolly and photo by Renata via Wikimedia.

Even though each county (and often each community within a county) of Britain followed their own harvest and ‘corn dolly’ traditions, the overriding idea was the same for all of them. The corn dolly represented the harvest cycle and the cycle of birth, death and rebirth as well as the deep rooted belief in a spirit representing fertility and nature.

A man was then chosen to rush to the site of the feast with the ‘The Neck’ of corn and enter the building by stealth avoiding a young woman who was appointed as guardian at the entrance to obstruct him. If he managed to get into the building without being soaked by her, he could claim a kiss as a prize.

The neck or corn dolly would then preside over the harvest celebrations and the feast where it would be seated at a prestigious place at the table.

The tradition of ‘Crying the Neck’ was revived in 2008 in Penzance. 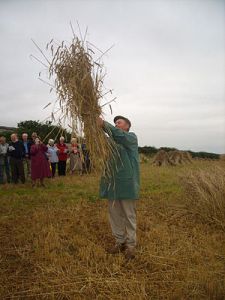 Crying the Neck at Tremayne farm in Cornwall, 2008. Image by Talskiddy via Wikimedia.

Called ‘Crying the Neck’ or ‘Crying the Mare’, Dorset customs surrounding the cutting of the last sheaf were very similar to those found in neighbouring Dorset and Cornwall.

When the sheaf was felled a shorty ditty was sung:

As in Dorset and Cornwall, one man was chosen to run with the ‘mare’ to the farmhouse avoiding the female sentry and the bucket of water. If he succeeded he could demand a kiss from the girl.

The sheaf was then fashioned into the form of a human figure or a spiral pyramid or less commonly an animal figure.

During Harvest Home the final cart was decorated with flowers and the youngest girl over the age of seven was chosen to ride in the cart. Representing the corn maiden she was dressed in flowers, a bonnet and a yellow sash. The corn dolly was displayed in pride of place at the top of the corn heap[7].

In Rannoch it was the youngest person in the field who was charged with gathering in the last sheaf. If the harvest was a good one, a corn dolly representing a youthful form was made and if the harvest had been a bad one, a figure representing the Cailleach or Hag was created and dressed in old women’s clothing[8].

Similarly in Fife, reapers would use two sheaves, one to represent the ‘Old Woman’ i.e. the past year and one to symbolise ‘The Maiden’ i.e. the year to come.

Contrary to many other places, farmers in the Hebrides viewed the last sheaf as an unwelcome burden as it contained an unlucky spirit. Often the sheaf or whole section was left uncut[9]. If it was cut then it was made into the Cailleach or Gobhar Bhacah (Lame Goat). The farmer that got left with it might throw it into the field of their neighbour. This was considered an insult and often resulted in a bloody and violent fight. The corn dolly would then be thrown from field to field with the unlucky soul who ended up with it having to bear the burden of looking after it through the winter[10].

In Wales to hold the last sheaf was seen as an honour. In the Welsh speaking areas it was called ‘The Harvest Mare’ or ‘the Hag’ and in English speaking communities ‘the Neck’.

In some areas of Wales the man who was chosen to bring the corn dolly to the festival had to protect it from a barrier of women throwing water and doing everything they could to prevent him getting it to safety. Often this would include stripping the man as he tried to hide the corn dolly under his clothes. If he succeeded he would be rewarded with all the beer he could drink at the feast and an honoured seat at the harvest table. If he failed he was ‘punished’ by being seated at the foot of the table[11].

Sometimes if another farmer had not finished their reaping, the finished reapers would smuggle the corn dolly into his field. They would choose their fastest runner amongst them to deliver the corn dolly. If he was caught he would be tied up with straw and thrown in the nearest river[12].

In the 19th century in Galloway reapers would dress the corn dolly in a long white frock, a ribbon around its waist, a wooden ladle for its head, clay face and beads for its eyes. It would be carried on a pitchfork in a procession towards the farmhouse.

The reapers would chant

In 2016 a harvest festival was revived in the Northumberland village of North Whalton. The artist, Faye Claridge created a 15 foot corn dolly based on archival photographs taken by the late 19th century photographer, Sir Benjamin Stone[14].

The village had a tradition of celebrating the beginning of the harvest season with a large summer Baal bonfire. At this bonfire the ‘Kern Baby’ was thrown into the fire and the village children would circle the fire dancing whilst the corn dolly burnt.

In the revived festivities the ‘Kern Baby’ was not burnt but just shown the fire. It was to be displayed outside the village hall.

End of a tradition?

The custom of creating a corn dolly from the last sheaf ended with the introduction of mechanised agricultural machinery during the Industrial Revolution.

Although the large corn dollies were no longer deemed necessary the regional shapes of the corn dollies did survive and the practice of making smaller corn dollies continued with the tradition handed down from generation to generation. The different shapes are incredibly varied ranging from abstract to more recognisable forms. Some examples are the Hereford lantern, Stafford knot, Suffolk horseshoe, Durham chandelier, Welsh longfen, Essex Terret, Yorkshire spiral and Oxford crown. They are made from a variety of different types of crops, again dependent on the area such as wheat, oats, rye, barley in England and Wales and rushes in Ireland[15].

Often they are placed in houses as a good luck symbol.

A love token and badge of trade

Countryman’s favours. Corn dollies and photo by Renata via Wikimedia.

The idea of the corn dolly was also adapted in other ways in rural communities.

One popular fashion was for young men to plait together three strands of straw and to give it to a girl that they fancied. If the next time they met the girl was wearing the token on her clothes close to her heart then he knew that she returned his affection.

Another interesting tradition was that corn was formed into symbols of different trades. For instance a corn dolly could be decorated with a piece of wool or horsehair to show that they were a shepherd or wagoner. They would then wear them at trade fairs when they were seeking employment[16].

The idea of a Corn Spirit is found in communities all over the world and feature prominently in Native American mythology[17].

The earliest corn dollies have been found in North Africa where they are known as the Aruseh or Corn Bride[18].

In Europe many examples have been found including in Bruck in Styria where a corn dolly was made into the shape of a woman by the oldest member of the community. Some eaves were then picked out of the corn dolly and made into a wreath which was decorated in flowers and worn on the head of the prettiest girl[19].

The history of the corn dolly is a fascinating one and the fact that the tradition has survived and is actually being revived and remembered in certain areas is incredible. I have always loved my corn dollies although when they were bought for me I had no idea of their symbolic importance and how they are a surviving reminder of the deep and rich customs of rural communities in pre-19th century Britain. I like to think that as well as being ornamental they also represent the young girls who would have been chosen as the harvest maids or queens at the harvest celebrations dressed in bonnets and decorated with flowers and sashes.