That an Englishman’s home is his castle, is a well used phrase about the English love affair with their own bricks and mortar.  But in the eighteenth century it might as well have been stated that an Englishman’s home was his own classical Arcadia.  During that century countless English gentlemen were sent off on the Grand Tour to finish their education and many came back with a passion for all things classical, and quite often they came back with a treasure trove of antiquities as souvenirs (both authentic and fake). 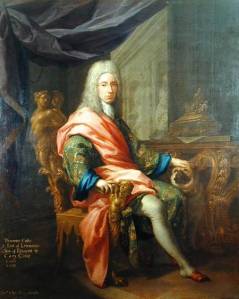 Thomas Coke by Trevisani. Collection of the Earl of Leicester.

One such Grand Tourist who returned to England with a particularly spectacular classical vision was Thomas Coke (1697 1759) 1st Earl of Leicester (fifth creation).

Coke set off on his grand tour between 1712 -1718 and came back not only with an extensive new library, an enviable collection of art and classical sculpture, but also with a BIG idea.  He planned to create a perfect Palladian country house set amidst an Arcadian Idyll in the heart of the English countryside.

During his travels he met Lord Burlington, the man who helped revive the Neo Palladian movement in Britain in the eighteenth century, and William Kent the noted Palladian architect and landscape architect.

Coke sounds like the typically Fielding-esque ‘squire Weston’ type of English gentleman – his favourite pass times were drinking, gambling and cockfighting.  And despite his aristocratic wealth, he wasn’t immune from financial troubles, he suffered heavy financial losses when the South Sea Bubble burst in 1720, which seriously delayed his construction plans.

Nevertheless with the help of Kent and Burlington, and a host of others, Coke set about creating one of Norfolk’s, and England’s, grandest stately homes:  Holkham Hall.  The Holkham estate, with its Perfect Palladian palace and landscape repleat with lake, obelisks, arches and temples was the Earls very own little piece of Italy on English soil.  But despite its visual appeal, it was also an expression of the Earl’s Whig political principles – Whigs were rather fond of likening themselves to the Ancient Romans and his political allies would have recognised Holkham as much as a political statement as an aesthetic and intellectual one.

The hall took so long to complete that, sadly, Thomas did not live to see it finished.  He died in 1759 and it was left to his indomitable widow, Lady Mary Tufton, to ensure that his plans for the hall were carried out.  Holkham Hall was finally finished in 1764, five years after Thomas Coke’s death; and the grounds not until the mid-nineteenth century.  The final cost of the hall has been estimated at £90,000 and this astronomical cost ensured that the hall was left virtually unaltered by subsequent heirs. Holkham Hall remains one of England’s finest Palladian Houses and is still lived in by the Coke family to this day.

Holkham Hall has long been one of my favourite Stately Homes and here are a few of my photographs, taken over a number of years.  With thanks to James Blakeley for permission to reproduce his photographs.  (Other images have been sourced from the internet and credited as appropriate). 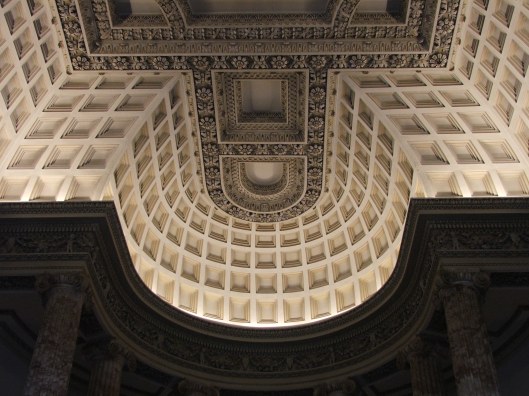 The Marble Hall. The hall is actually made of Derbyshire Alabaster. The coffered dome was based by an Inigo Jones design inspired by the Pantheon at Rome. Image by Lenora.

The Marble Hall. The Fluted Columns may have been based on those from The Temple of Fortuna Virilis. Image by Lenora. 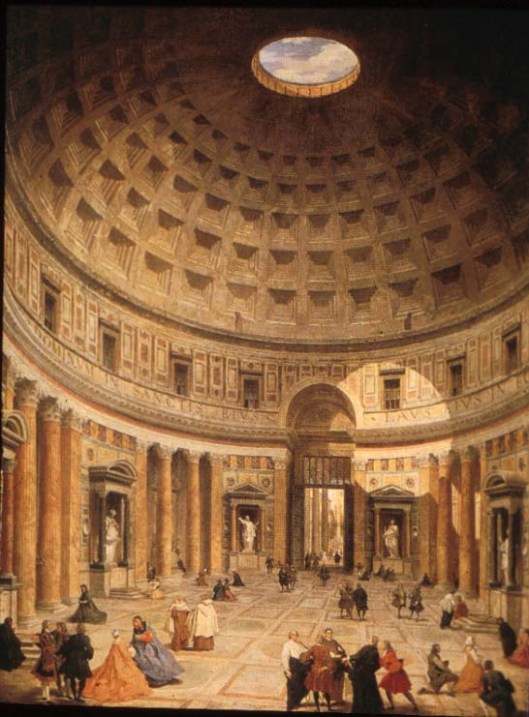 Eighteenth century painting of the interior of the Pantheon in Rome. Artist GP Panini.

The Saloon. Hung with Rich red Genoa Velvet wall hangings, this plush room would have been used by Coke to entertain his Whig friends. Image James Blakeley. 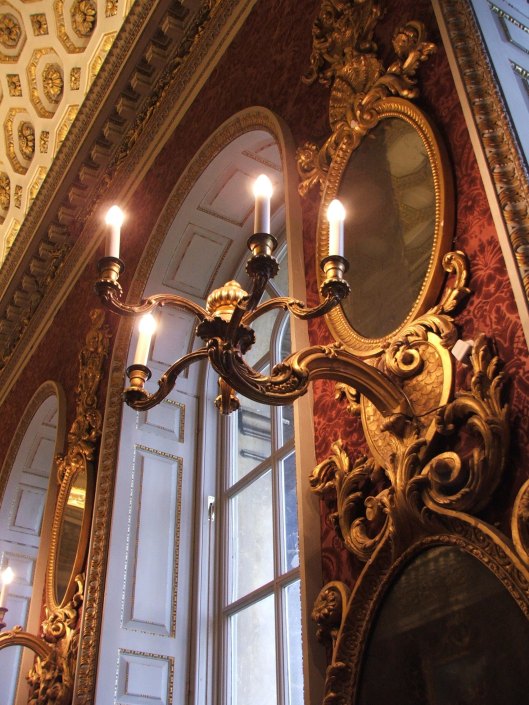 Pier glass and window, the Saloon. Thomas Coke wanted a comfortable, if palatial, home. To ensure the rooms were not too cold, he limited the number of windows to just enough to light each room. Image by Lenora. 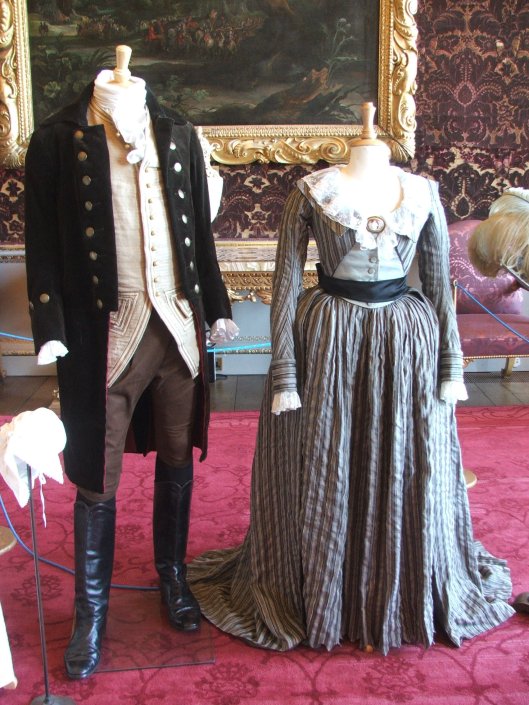 Costumes from ‘The Duchess’, starring Keira Knightley, on display in the drawing-room or Saloon. I forget which. Image by Lenora. 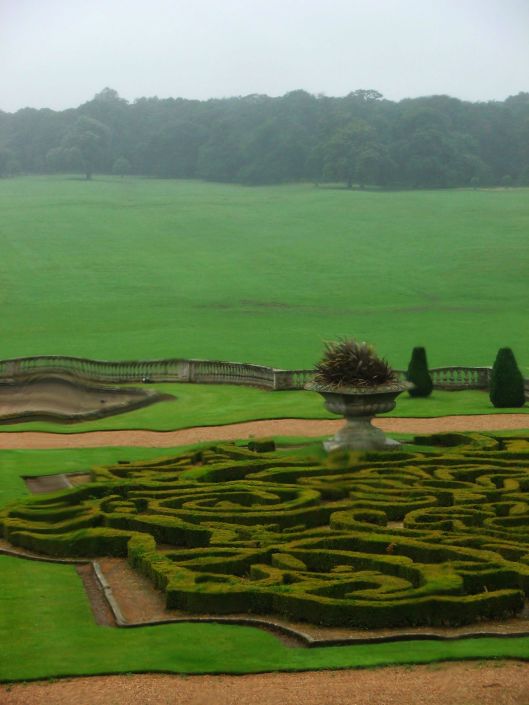 A corner of the terrace garden viewed through glass on a rainy day. Image by Lenora. 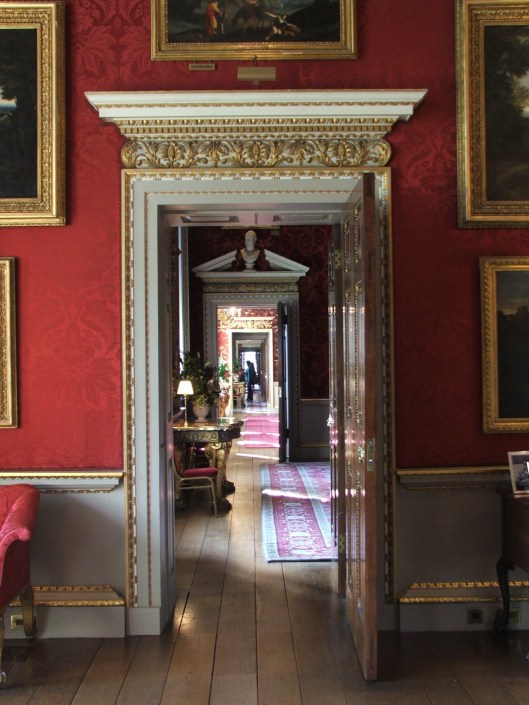 Rather than corridors, the rooms are enfiladed and open on to each other. Image by Lenora.

The Landscape Room. On his Grand Tour Thomas Coke collected many fine landscape paintings by Claude Lorrain and Poussin. Image by James Blakeley. 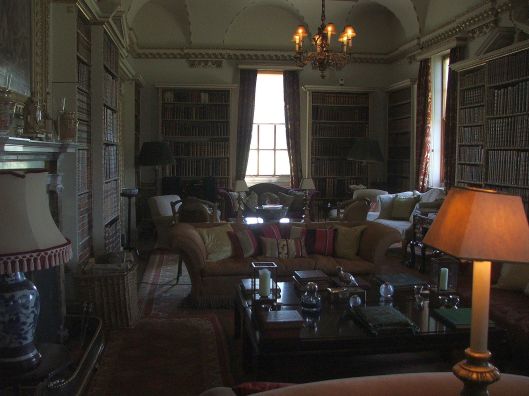 The Long Library. Coke brought home many books from his Grand Tour. This is now the Coke family’s main sitting room. Image by Lenora. 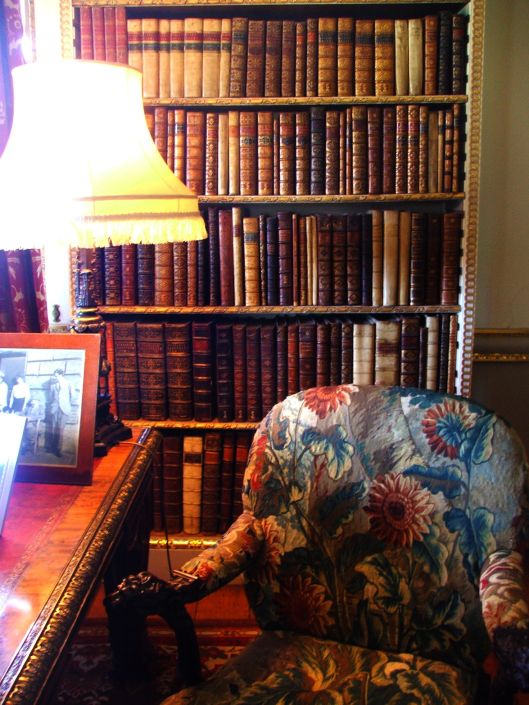 Even such a grand house has its cosy corners. Image by Lenora.

A classical bookcase in one of the Tribunes. Image by Lenora. 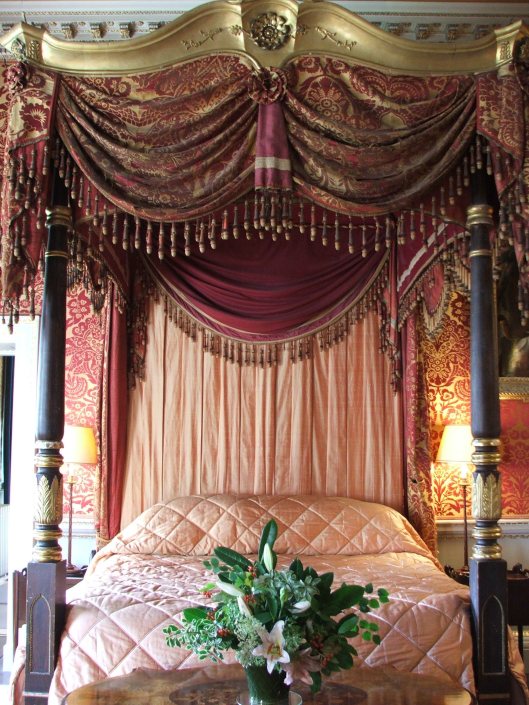 The Parrot Bedroom so-called because of the Frans Snyders painting of Parrots and Macaws that hangs on the wall. Image by Lenora. 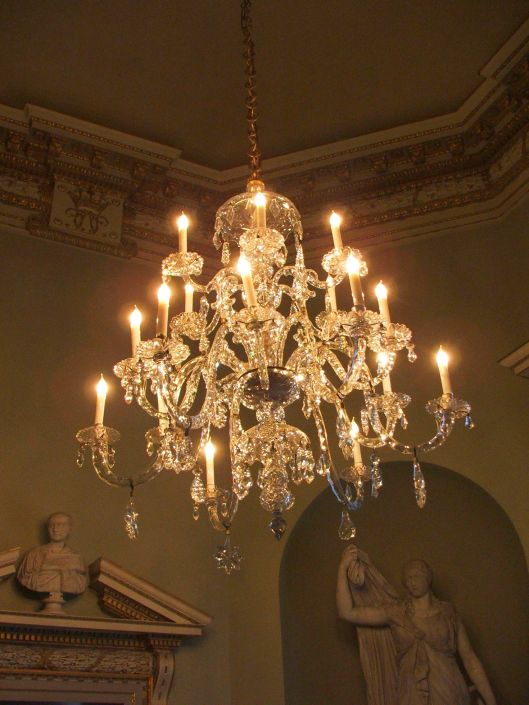 Chandelier in the North Tribune. The tribune leads to the gallery that houses the sculptures brought back from the Grand Tour by Thomas Coke. Image by Lenora.

View of one of the interior courtyards tucked away in the Hall. Image by Lenora.

The Chapel in the hall. Designed by Matthew Brettingham snr. Image by James Blakeley. 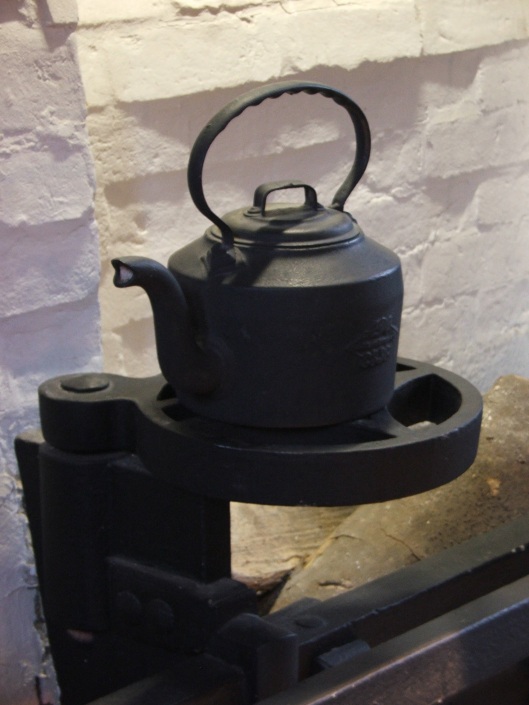 Cast Iron Kettle from the Old Kitchens. Image by Lenora. 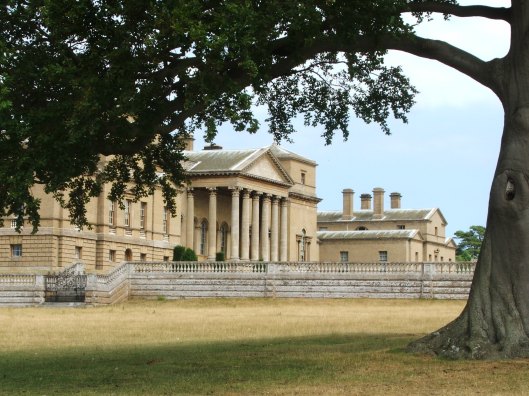 The south face of Holkham Hall. Image by Lenora.

Before refrigerators were invented, those who could afford it had ice houses for storing ice. Image by Lenora. 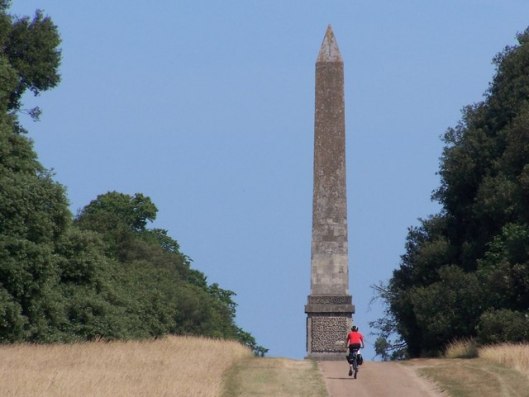 The grounds were begun in 1729 before the construction of the hall; the the Obelisk which is 80ft high and dominates the parkland was built in 1730 to commemorate this. Image by Paul C. via Wikimedia.

The Doric Temple sited within Obelisk Woods which were planted in the 1720’s and 30’s. Image Xavier de Jauréguiberry by via Pinterest 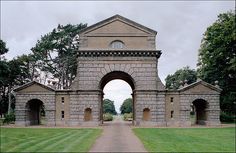 The Triumphal Arch, designed by William Kent in 1739 and built in 1752. Image by Xavier de Jauréguiberry via Pinterest. 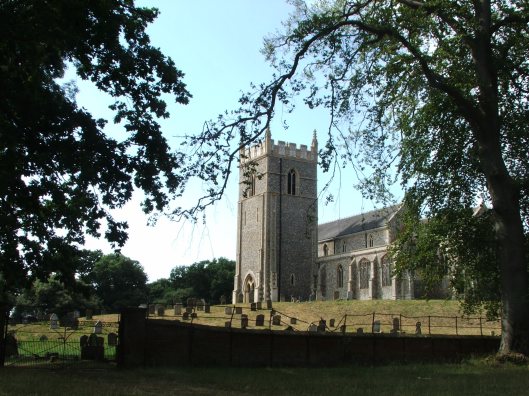 St Withburga Church, half a mile from the hall. Situated on the site of the medieval village of Holkham, the church dates from the 13th Century. It has the flint facings typical of Norfolk churches. Image by Lenora.

Entrance to the walled garden. Image by Lenora.

Holkham Hall is open to the public:

The Approach to Felbrigg Hall

Felbrigg Hall is situated amidst vast parklands in North Norfolk and is one of the finest houses in East Anglia.  Originally the home of the Felbrigg family, the land and house was acquired in the fifteenth century by the Wyndham’s.  Its Jacobean facade hides elegant Georgian interiors that speak of the Wyndham/Windham’s tastes and fancies over the centuries.

Although the last Wyndham died over 200 years ago and the home has been in the hands of the National Trust since the 1960’s, not all of its past residents seem eager to quit their former home. 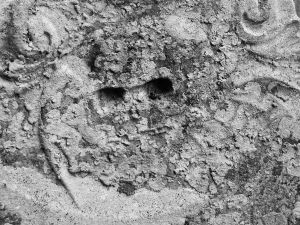 One such tale tells of an elderly woman, once a parlour made in the Hall, recounting how she and other maids would find that their candles were mysteriously extinguished when ever they passed by a particular door.  A female voice would beckon them to enter the chamber but the room was always found to be uninhabited…

By far the most famous spirit inhabiting the hall is that of William Windham III (1750 – 1810) known as ‘the fighting Windham’ for his sporting prowess.

William Windham was a noted orator and a prominent statesman for much of his life. His career spanned the American War of Independence, the French Revolution and the Colonial Wars of the early 19th Century; but the over-riding passion of his life, and the cause of his tragic death, was his love of books.  The wonderful Gothic library at Felbrigg, designed by James Paine in the 1750’s, was filled with books both William II and William III each brought back from their Grand Tour.

William was to meet his fate one summer evening in 1809. As he returned to his home in Pall Mall, he noticed a fire had taken hold in a house on Conduit Street very close to the residence of his friend Robert North.  Windham knew that his friend had a very valuable library and he immediately set about the rescue operation.  He and three others succeeded in rescuing most of the valuable manuscripts.  The rescue was not without its price though as William fell and bruised his hip.  The bruise became a tumor and the tumour needed to be operated on.  Operations in the early nineteenth century were brutal affairs, and William died as a result.  His final words, addressed to his physician were: 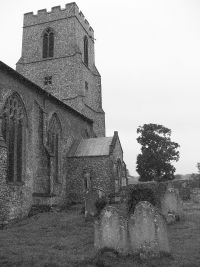 “I thank you; this is the last trouble I shall give you.  You fight the battle well, but it will not do.”

His body was buried in the family vaults at Felbrigg Church a stones throw from the Hall…and the spectre of William Windham can occasionally be encountered in the dark and shadowy Gothic Library.  He has oft been found standing by a table when his favourite volumes were laid out; or ensconced in an easy chair, by a roaring fire, engrossed in some favourite book.  It would seem like a pleasant way to spend eternity.

Leaving the hall and walking about the grounds you soon find yourself amidst the dark woods of Felbrigg where oaks, sweet chestnuts and conifers hold sway.  Here you may cross paths with ‘Mad Windham’ driving his phantom coach through the trees.  And a spectral wind rising out of nowhere and disappearing as suddenly as it arose, may cause more than a whisper amongst the leaves….