A meeting with the Goddess 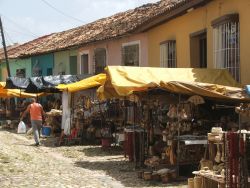 I visited Cuba in September 2010 and one of the most striking and impressive places that I visited was the Santería Temple in Trinidad, located in the baking south of Cuba.

Walking through the dry and dusty cobbled streets in the blinding sunlight I suddenly became aware of a strange face looking at me from the shady interior of a building.  A doll sat upon a low stool in a bare room – its black face peering out from amidst a froth of white lace, long white dress trailing the floor – the presence exuding from this doll was like a jolt of electricity.  It was the guardian of the temple of Yemayá. 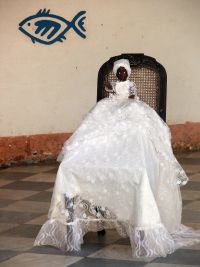 Guardian of the temple

In the shrine itself the Goddess stood on an elevated pedestal overseeing the devotions of her followers.  An altar filled with clear vessels of water was in front of us.  The shrine opened up to a beautiful and lush green garden beyond.  Light streamed into the interior, reflected off the water and created a magical quality of sunlight and shadows.

Queen of the oceans

Yemayá: Mother of fishes and Queen of the Oceans is one of the most powerful Orisha’s in the syncretic religion Santería.  Orisha’s are nature spirits that originated in the Yoruba religion of Africa; Yemayá was originally a river goddess from Nigeria who was travelled across the oceans when her people were enslaved and she became the goddess of the oceans.  She is considered to be the mother of all living things and rules the waters of the earth.   She has a number of Camino’s or roads which reflect different aspects of womanhood ranging from the nurturing mother to the fierce machete wielding warrior.  She also has syncretized Catholic saints including the Virgin Mary, Stella Maris and the Virgin of Regla. 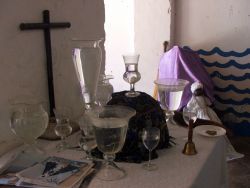