“Look into despair, all ye who enter here” 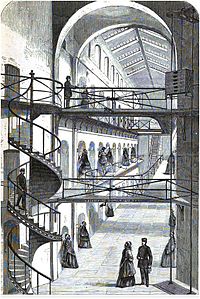 These welcoming words hung above the entrance to Bridewell Prison for convicted prisoners in Clerkenwell and together with the nearby New Prison accommodating those awaiting trial, were a grim reminder of 17th and 18th century justice.   Bridewell Prison closed in 1794 and its functions were taken over by the Coldbath Field Prison.  The New Prison was rebuilt three times, the last being in 1847 when its name changed to that of the Clerkenwell House of Detention.

Originally three storeys high with a network of underground tunnels, it was one of the most important and busiest prisons in Victorian London taking in over 10,000 prisoners a year. Accommodating men, women and children on remand, it was considered to be less harsh that many of the other prisons.  Prisoners were allowed to keep their own clothes and hair was not forcibly cropped, although whether the inmates considered themselves to be lucky is anybody’s guess as they passed beneath a grisly replica head hung on the gates of the main prison “symbolising criminal despair[1]”.

A number of famous criminals spent some time at the prison including Richard Burke.  Richard Burke was a member of the Fenian Society (an organisation dedicated to the establishment of an independent Ireland).  Employed to purchase arms for the Society in Birmingham, Burke was arrested and sent to Clerkenwell to await trial.  On the 13 December 1867 in a failed attempt to rescue him, the Fenian Society planted gunpowder in the exercise yard.  The explosion killed a number of bystanders in Corporation Row, and some members of the group were later executed.  The incident became known as the Clerkenwell Outrage.

The prison was demolished in 1890 to make way for the Hugh Myddleton School (which itself has now been converted into flats).  During the Blitz the tunnels were re-opened as air raid shelters.  In 1993, a small section of the 2½ acres of tunnels was opened as a museum and in 2000, shortly before it closed, I was fortunate enough to visit.  Until a few weeks prior to my visit, I had never heard of the House of Detention, despite having lived in London all of my life and having been on countless historical walks, so I was unsure of what to expect.  I managed to convince two of my friends to accompany me and full of curiosity we arrived at the museum.  From the start we realised that this was going to be an unusual experience as all we could see of the lady at the till was her hand as she took our money and gave us the tickets, the barred window having been blackened out.  We then descended into the ventilation tunnel (a brilliant piece of Victorian construction) and made our way along it. As we walked we were somewhat disturbed by a loud clanking sound.  Getting increasingly nervous as we got closer to the sound we finally discovered a mannequin chained to the wall, activated by a mechanism which enabled the mannequin to fall forward producing the sound of chains being jolted. 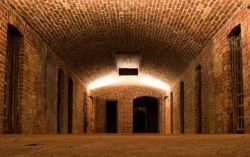 Although much of the underground network of tunnels were nothing more than rubble, a number of rooms have survived, including the fumigation area, laundry, kitchen, transportation chambers and punishment cells.  The air smelt damp and many of the information boards and exhibitions were suffering from mould damage.  A number of mannequins representing the prisoners had been placed in the cells to give an impression of what it would have been like.  I am not sure if it was the sense of neglect, dim light, damp, silence (for most of the time we were down there we were the only visitors) or claustrophobic atmosphere but for the entire visit I felt strangely unnerved. I found myself watching shadows out of the corner of my eye and at the same time trying not to look too closely at any one thing.  The feeling of unease increased as I wandered through the museum and it was a sensation I realised my friends were sharing, judging from the fright we all had when another visitor appeared round the corner of one of the exhibitions.  Instinctively we stayed together, only moving from one room to another when we were sure we were all ready to move on.  The feeling of relief when we finally emerged back into sunlight and able to take a breath of fresh air was audible.  We decided then and there that it had been a very strange experience and that none of us would care to go down there again.

It was only a few years back when searching through the internet to see if the museum had reopened that I came across ghost stories connected to the prison.  Various sightings have been reported, the most common being that of a little girl crying, an old woman frantically searching for something and ignoring offers of help and the presence of an unpleasant individual who stalks lone women.  I can’t claim to have seen or heard anything but I have to admit that in all my time of going on ghost walks, visiting prisons, old houses, crypts and castles it was the most unnerving place I have ever been to.  If it is true that places absorb the emotions of those who were previously there, then the horror and distress of those incarcerated in the House of Detention must have been great indeed.  Today the tunnels and cells have been spruced up and sanitised and have been turned into a temporary exhibition and theatre space.  Whilst it may now no longer suffer from neglect and damp, if someone asked me if I wanted to go down there again, the answer I have to admit would be a firm no!