Anyone who has had a good poke around on this blog probably knows that I absolutely LOVE Whitby Goth Weekend.  Having missed a couple of events over the past year or so I was all set to head off to the home of Goth for the Halloween WGW last year when disaster struck.  Boggle Hole YHA inexplicably decided to cancel all of their bookings over that weekend at the last minute.   Of course by that time there was no accommodation left within a 20 mile radius of Whitby ….Grrrr didn’t they know I needed my Whitby fix?

Anyway, patience was finally rewarded, and this weekend I got to stay in Abbey House (my favorite YHA – right next to the Abbey ruins and St Mary’s graveyard) and wander about a variety of historic settings in Whitby dressed in full Victorian Goth regalia and enjoying some fantastic bands in the evenings.

This years events are special because Whitby Goth Weekend is celebrating its 21st anniversary.  Jo Hampshire probably never imagined how her alternative music festival would mushroom over the years.  These days the Music festival element can seem a little swamped by all of the weekend Goths, Victorian enthusiasts and the ever-growing steam punk invasion, but for those who still remember the original raison d’être for the weekend there were some fantastic bands on at the Spa Pavillion including Abney Park, Jordan Reyne, Manuskript, The Chameleons, Doctor and the Medics and The Damned (to name but a few).

Anyway, here are some of my photos of this weekends event… 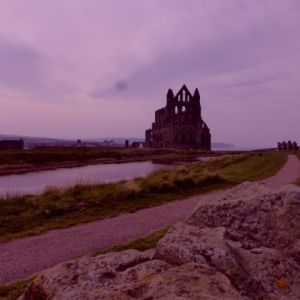 First glimpse of the Whitby Abbey.

St Marys Churchyard and the 199 Steps 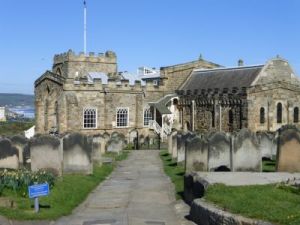 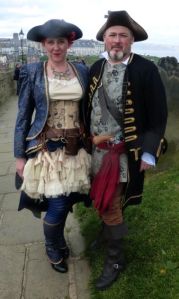 Heading down into the Whitby from St Mary’s

Down in Whitby town 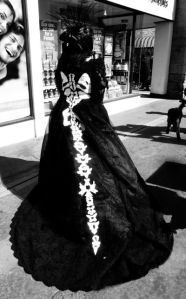 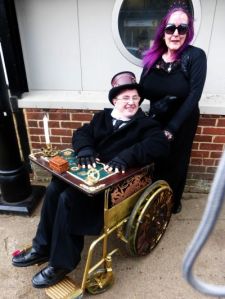 The proud owner of possibly the coolest wheelchair ever.

A group of intrepid steam punks outside the penny arcade. 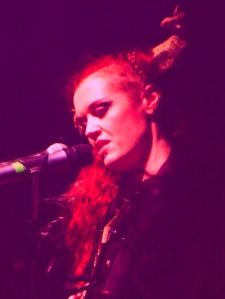 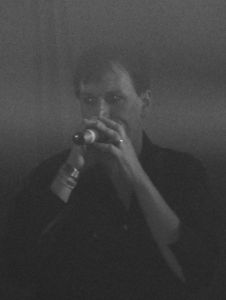 The path through the churchyard that leads to the Abbey

All photographs by Lenora

A review by Lenora

In between looking at the dark underbelly of history I also do reviews of Indie authors for a friend’s website www.ingridhall.com. Not all of the books I review for Ingrid would fit the aesthetic of this blog but I thought this one, although it is a children’s book, was very much in keeping with my interests.

The first book in the Jupiter Chronicles introduces the reader to the Callisto children: Callie 9, and Ian 12.  They live in the late nineteenth century, and have had to suffer the mysterious loss of their father Peter.  This has left the children fatherless and impoverished. While their mother struggles to provide for them, the children must face up to being the only children in school without a father.   One night Callie, the curious one, accidentally triggers a secret device in the telescope that Peter gave to his son just before disappearing.  The telescope is suddenly transformed into a steam-powered space-ship and whisks them away from their home and off across space to the planet Jupiter.  The children find themselves in the beautiful steam punk Jovian Empire, they meet the sinister hissing Emperor Phobos and with the help of Stinky Frank, a robot, set out on a series of adventures to find their father who they discover is the First Petros of Jovian; their adventures herald the beginning of the Steam punk age.

I have to admit to being incredibly biased in this review – I LOVE steam punk and am not averse to occasionally dressing up a bit steam-punky and, of course,  I do possess a very fine pair of steam punk goggles!  For anyone not familiar with Steam punk, it is basically a branch of science fiction: alternative history/speculative fiction often with a Victorian/Edwardian aesthetic.  Basically think Victorian Style with modern technology – brass computers powered by steam – that kind of thing.  I LOVE IT.  And the idea that someone had written with the intention of introducing the Steam punk aesthetic to children seemed like a fantastic idea!

This book is clearly aimed at the younger pre-teen, not being an expert on children, I would say 7-10 year olds would love this book.  It is written in a clear style that children would easily understand, yet also presents them with some challenges.   The characters of Callie and Ian are well drawn and their sibling banter is very authentic and very funny – I particularly loved Callie’s pithy entries into her journal.  Emperor Phobos was wonderfully sinister with his reptilian hisssssing speech.

There are hints of a more deadly version of Quidditch in the Drifterdash games and perhaps a nod to John Carter of Mars; the steam punk elements were all there, and beautifully described – especially the city of Jovian.  I loved the emphasis on learning which was present throughout the book and I particularly loved the way that the novel was peppered through with facts and questions – to pique the interest and feed the imagination.  The book also deals with more serious issues faced by children as it tackles the issue of growing up as a single-parent family, and coping with the loss of a parent.

All in all, this is a great book to introduce Steam punk to children, I think both girls and boys would enjoy it.  Although it is an adventure story, it is also very educational as it encourages a sense of enquiry both into history and science, whilst also appealing to the imagination and creative side of children.

You can buy the Jupiter Chronicles on Amazon: